He is the great-grandfather of Dr. Frank via Lucy Foster Wilson. She was the focus of the "Trials of the Wilson family" that published in The Essex Genealogist (Vol 34, No 3, pg 155, Ahnentafel - later published/printed in The Gardner Annals). As is mentioned in the Findagrave record (FAGR), she inherited links to the 1692 madness (view from a Brit) from both her father, Jonathan, and her mother, Prudence Goldthwait.

We had this added to the page of Jonathan's father, Joshua Wilson. These two were 'hung by the neck' together with some others.

Yesterday, we got emboldened by getting into the guidelines of D.A.R. They mentioned their cemetery work. Well, we got the impression from the 'Plymouth' folk (this has been mentioned several times) that they don't care. Yes, our focus is western movement which brings in a few subtleties, which are not new. However, we have seen enough issues to want to raise this to awareness. We were looking at Prudence's internment record. She died in Salem. There are some indications of where she was buried. Need to have that interpreted.

In the meantime, on looking around at the Salem cemeteries, we found a lonely FAGR for a Jonathan Wilson. It was at Howard Street Burial Ground and showed the right date. So, we immediately asked for an update which has been started: Jonathan Wilson #36014749. This was put into place on 18 Apr 2009. When everything is updated, we'll get rid of the FAGR that we created. In the meantime, we'll search for Prudence's resting place.

BTW, in terms of the crowd that scoffs, there is a lonely grave out west of a descendant. We'll not ignore this and continue to document matters. A synopsis is due this year (2020), say when the arrival is going to be celebrated. Genealogists. You do not give life. Nor do you create the truth. Gosh, is not anyone interested in the philosophical aspects being suppressed with the mad rush toward technology? Say, foundational aspects of genealogy? Notice, has nothing to do with fundamentals.

Anyway, on another note, we used a grave site of old that is a little removed from that non-left coast. A report of the times mentioned a town and some distance in reference to where some old guy was buried. Later his younger bride was buried there, too. On a search, sure enough, there were the old stones, sufficiently marked.

A question might be about why we missed Jonathan's FAGR before. The eye sees what it wants. That 'want' is conditioned by a whole lot of things. As mentioned before, that conditioning is wide open for study and further understanding. The rise of AI might be a motivating factor that has been missing. Let's hope so for the grandkids' sake.

Kudos to the FAGRers for their good work.

02/18/2020 -- Jonathan married Prudence Goldthwaite in Salem. Jonathan had been born in Andover, Essex Co. in 1774. Prudence had been born in Sutton, Worcester Co. in 1779. Both of their fathers are registered in the DAR database for Patriots. Jonathan and Prudence lived in Salem. He died at the age of 39 in 1814 and was buried, as we see above, in Howard Street Burial Ground. Prudence lived until 1860 which means that she was a widow for 46 years. She is in the 1850 U.S. Census and the 1855 Massachusetts Census. But, until yesterday, we didn't know where she was buried. Turns out that the internment records for Salem have been digitized. We find that Prudence was buried in the same area as was Jonathan. There doesn't seem to be a stone. Here is a clipping from the record. 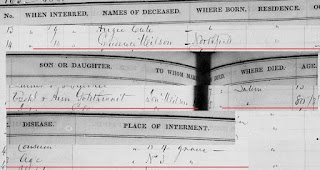 It identifies here parents and her deceased husband. Also, it says 'No. 3, grave' which needed a little research. 'No. 3' is Howard Street Burial Ground.