We are reviewing research results from the beginning, to now. This will be an iterative task over the next few months as we look at different themes. We will be making changes to our presentation material and format as we go along: Renovation, plus. Since we have a Cape Ann focus and are starting at before the arrival, the first two passes dealt with houses and sources of which there are many. So, as we go along, we will report. But, we will also built a coherent view that seems to be lacking.

Now, another theme dealt with the different Gardner families. There were several views of how many Thomas Gardners there might have been: A Thomas here and a Thomas there. Associated with that issue is this question: Whence came Thomas and [Margaret]? Too, when Roger Conant took the group to Naumkeag, we need to know this: Where was Thomas? What was the story concerning the early times? There is really no end to this. 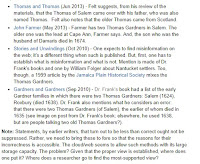 Our intent is to be thorough, as much as we can, and build coherency as we progress. Too, we will be on the outlook for new material. Example of the latter was the 2014 find by John Cook of the marriage notice. This was taken further in 2018 such that Thomas is seen as having only two wives: Margaret anew.

There are many examples of the first part, that is being thorough. Our bibliography (History of New England) will record what we have accessed and read. We will be adding to that on a regular basis.

Today, let's look at Frances Rose-Troup's study of Rev. John White. This was published in 1930. She spent time looking at records and made some interesting finds. There are two that we summarize.

There were lots of tales of two Thomases. Dr. Frank said that he didn't see evidence of this. But, he didn't see the work of Frances Rose-Troup. The post (A Thomas here and a Thomas there) is a 2013 look at the issue. This needs to be brought up to date. It's early, incomplete, and indicative of why we are in the organizing mode.

For the important themes, we will collect what we have. Also, we can point to additional work that was mentioned but not done. For one thing, the notion from the start was to be thorough and collect all that has been done. It needs to be brought to light for future researchers to not think that they have discovered some missing piece.

Times are different than when Dr. Frank was working. It is much easier to do this type of consolidation. Too, though, there are technology aspects that will be of on-going concern. Hence, one goal is to have our work be used as an example. Many have started down this type of road, however, with regard to Thomas and Margaret, we'll cover the basis as best we can.

So, as mentioned. I think that Thomas was related to the Thomas that married into the White family some way. If you look at the Dorchester investors, you will see Conant. So, Roger was sent to Cape Ann due to a business decision. Thomas was chosen, originally, due to family ties, I would bet. That was the norm in those days. He and Roger were not of the same class. Endicott, from what I can see from my reading, knew Thomas' background (talked to him). Called him Mr. They did several things together long before Thomas deigned (I said that before) to become a Freeman. Even in those day, the Church (of whatever variety and its people) was not all powerful. That has been a continual dynamic throughout history.

It is significant that Thomas married a Quaker right in front of those ones, such as Endicott who put Dyer to the rope. Of course, they did some little fines with her not going to the services. Anything said about stocks, or whatever?

Thomas seems to be tabula raza. He didn't leave writings. However, his sons spoke of him. Like, John mentioning Sherborne, Dorset. Too, they were well educated. That was due to their folks. Thomas talked to Rev. Hubbard who also talked to Conant (who bemoaned being handled improperly). We didn't see that published until almost 200 years later. Plenty of folks have reported what they saw or thought they saw.

We'll methodically go through all of this stuff. Actually, already have. Blogs are the best was to organize this stuff. So, we'll use pages (see above (Tabs): What's new, FAQ, Page map, TMM - there are lots more). Plus, we'll write articles. That is what The Gardner Annals is for, in part.

While working, we always look for new areas to poke into. So, the tasks build as more are pushed on the stack than are ever popped. And, we will get to (through) that (long list) by funding research. Also, there really is no limit in that all of the Cape Ann families need to be looked at. Right now, Conant, Woodbury, Trask, and Palfrey are covered. Why? Due to their being involved with the Old Planters - Beverly. In the beginning, it bothered me, a little, that these other families never mentioned Gardner.

What was that? At least, Felt, in going through the records, brought out references to activities by Thomas. Dr. Frank wrote of some of these. So, Thomas was here. The kids are evidence of that.

Did they talk of leaving? As in, what the Paine sisters wrote? You know, the stories of some going back to England or going to Virginia. Well, Thomas and Margaret and the kids were at Cape Ann. Having a good time.

Lots to do. The 400th will have an entirely different feeling than did the prior commemorations. Oh yes. The 200th? A parade was mentioned (Chronicles of Old Salem). It coincided with the 50th of the U.S.