Tale of Benjamin West, the Patriot

The web and blogging has many instances of what one might consider proper information handling. That is, the web was originally to focus on supporting research by helping disparate parties share their material. I like that the NEHGS has a blog, now. One recent post looked at a Mayor running for President of the U.S. in terms of pedigree. So, he's a cousin several times. Then, we have nice city blogs, such as Streets of Salem (post on Salem's maritime past). How did I get to this?

Well, recently, I decided to take a good (rather than skimpy) look at the Chronicles of Salem (CoOS). Gosh, first thing I noted was that it was a gem. So, I included some items for it into our 'annals' scroll at our Portal to truth. There will be a lot more. Two days ago, I saw that Bunker Hill was June 17th in 1776. This reminder was via the History of Massachusetts blog. So, I go to the CoOS and see that Lt. Benjamin West of Salem was killed. Who was he?

Just like Christopher Childs did with the Mayor post, I went looking. Mainly, the  idea is to find a Gardner link or something related to Cape Ann. Well, Benjamin did have an ancestor who was a niece of Roger Conant. There is more, though. We can call this Benjamin, the Patriot.

At the same time, we have a Benjamin West from the southern region, Maryland. He had some northern New England ancestors, too. So, we'll look more closely at that. However, this Benjamin was a Loyalist. He also was a known painter who worked in Europe. He never returned.

There are other Benjamin Wests. As we look further at the Patriot, we will look at these folks, some of whom are not concurrent with the Patriot: Benjamin West of New Hampshire, Benjamin West (autodidact), Benjamin F. West (1818-1854), and Benjamin A. West (shipmaster out of Salem, 1850-1860). The idea for listing these is to look for family ties.

Now, back to the Patriot. There was a memorial put up for Bunker Hill not long after the Revolution. However, Benjamin was not mentioned. His grand-nephew looked into the matter and got him on the rolls. What happened? Well, we'll look further. Benjamin was killed in 1776. It was not until 1895 (over 100 years later), that the State acknowledged this. One thing to note is that Rev. Felt, in his look at Salem records, mentioned Benjamin and his sacrifice. So, how did he get missed? 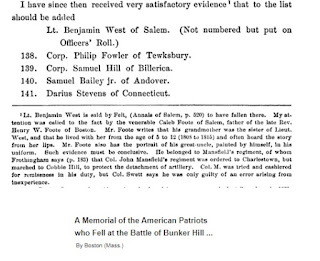 We will be back with more information about Benjamin, the Patriot, and his family.

06/19/2019 - Last month, we did some work related to the U.S. Civil War. The net effect was to get the FindAGrave for Walter A. Ingalls connected to that of his wife which we own and point to research material on WikiTree. This one deals with the Revolution and a patriot.

06/20/2019 -- In the image, the quoted Caleb Foote is Publisher of the Salem Gazette. The West who married a Foote was Martha who was the daughter of Samuel Massey West. Caleb (the publisher) called Benjamin his great-uncle (page 296 - his autobio from the book by Mary Wilder Tileston -below). Also, Caleb Foote was friends with Nathaniel Hawthorne. So, we can get the proper timeline. More coming as we get the different families lined up (too much fun). Mary Wilder Tileston (sister of Henry W. Foote) wrote of Caleb Foote and Mary Wilder (her parents).