There are two entries in our Devlog dated yesterday and today that are reminders of a reorg in process. We use that for technical notes along with our technology-focused blog which is moving from WordPress[dot]com to be under the TGSoc[dot]org site. As we do this, we're looking at the main site, too (ThomasGardnerSociety[dot]org). This site started in 2010 under the 'apx' regimen of MicroSoft using their OfficeLive approach which was quite nice. We have documented that move with respect to research and decisions in the context of general technical discussions that pertain to technology and its influences.

What the graphic shows is our look over the years as we have improved upon a minimal basis. That is, we did not buy into any of the commercial thrusts. Why? Many reasons. Too, we have watched the state of the art with respect to the Open Source efforts. You know what? We avoided that, to date, but are seeing signs that are encouraging.

What? Say, old, experienced eye versus the over-enthusiasm of the youth. Turns out, my contrary way has not been solitary. I watched a video of a meeting at Google which got my old heart palpitating. The message was right on. Or as I just heard a FBI guy say, two days ago, the more complex something is the more it is prone to being misused. We all know that.

In any case, we have requirements that need to be brought together. The original focus was to cover 100 years of research which is since the time of Dr. Frank. And, to look closely at his and his peers efforts in the entirety. Modern means involve the computer (now? augmentation - we were doing that two and more decades ago). There have been enough mis-starts for us to learn. Too, we can show how to address issues and make steady progress, albeit at times things might seem like they are more in disarray than is actually the case.

Who walks into a newly framed house and sees what the end product will look like? Well, we have the modern gal now (Waco) who shows simulation. Not possible without the computer.

So, we are dealing with more than genealogy. History will be redone with newer looks using all sorts of media. In terms of family trees, it was nice to see 'wiki' applied (WikiTree). But, the NEHGS now has their own method which we will be trying and writing about.

Lots to do. Any help would be appreciated.

Note: With regard to technology, I went looking for material on the ancestry of Sidney Perley (Sidney's Antiquarian, How close is close? II, Lucie following Sidney, Essex County, South (east and central) Essex County, and more). There was a little on rootsweb (at ancestry). However, WikiTree has a Profile on him. He has colonial New England roots. So, that link represents two types of technology that will be in focus. The first deals with presentation which was print for a long time. Various types of on-line presentation methods have evolved with new ones all of the time. I was pleased to see a good one re-emerge after a little absence. The second technology focus will be genealogy and its related history. We have used WikiTree enough to be impressed by its power and the ease with which an expert can work. One can get out of the mouse or touch mode, for instance. But, other technologies? Well, consider genetics. However, we will see more, perhaps, those dealing with the likes of paleoichnology (see note  07/15/2015) will come to fore sooner than we might expect. In any case, our intent right now is to demonstrate a minimal basis with a few extensions of note. Then, we'll be prepared to talk the future in a mode that is necessary. BTW, the NEHGS now has a tree tool, ancesTREES. 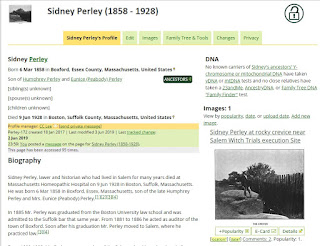 06/02/2019 -- Current location of the new site (Technology blog). Formatting is not final. Too, we need to update pointers to the old site (at WordPress[dot]com). One benefit will be no ads. We will need to do tuning and other technical admin work while we try to determine requirements and performance specs.

06/30/2019 -- While looking at the Pageant of Salem from 100 years ago, I was noticing the names and went to search. Of course, WikiTree came up. And, there was a pointer to some material being hosted by TNG which looked interesting. Here is one example (Kloosterman), which keeps a blog dealing with their effort.
Posted by AJSwtlk at 9:02 AM