Earlier, I wrote of Dr. Frank's effort at The Massachusetts Magazine and his last issue. In looking at the TOCs for all issues that we printed in two issues of The Gardner Annals, one could see that there was less and less content. Too, Dr. Frank, and his sister, Lucie, were providing more and more of the content. However, the Spanish Flu coming into New England would have been a contributing factor.

Now, of late, Sidney Perley's work has been of interest: links to all of the issues of The Salem Antiquarian. It ran from 1897 to 1909. I mentioned that I was going through all of the issues. Sidney had access to records. Too, he was thorough. In the last issue, he covered the Brown families of Essex county. That is an area of research, so I found it interesting. He had started with the A's and got to the B's before his energy ran out (below). Sidney published Dr. Frank's early work. I have one example where Dr. Frank changed his material, yet the original work is there. And, it has been digitized. So, that is another story to tell. Lucie picked up Sidney's work and published it in the TMM. Sidney mentioned the TMM a couple of times in his issues.

But, please, read his little explanation (Notice of discontinuation - pg 210). 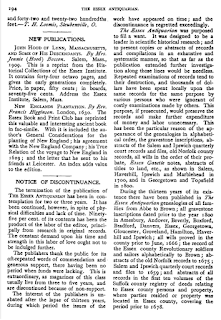 As Sidney mentioned, he did ninety-five percent of the work. The guy got older over those thirteen years of publication. His walkabouts were phenomenal, as we have said. And, Gardner Research will be using them. Already, looking at one map opened up a little avenue of unexpected research which resulted in several posts and a stack of things to do.

To facilitate the discussion, we will be putting out a list of things to do. Some will be easy enough like writing a little bit. There may be some technical things for those who are interested.

Incidentally, after he left his hard work at the Antiquarian, Sidney did more writing, including his History of Salem in three volumes (see copy at the University of Virginia - Volume I, Volume II, Volume III). The text is quite extensive in its handling of the witch trial.