How close is close? II

Last year, a post asked, how close is close? It compared several posts over the years that asked, where is Thomas? As in, his bones.

Well, the graphic in each was way off. So, we will update this today and will follow up with an in-depth look at this particular concern of ours in terms of how the realization came about of what happened over the years plus start a look at Thomas' timeline.

What led to this review was seeing the plate in Dr. Frank's book (1907). He mentioned Gardner's bridge being visible. And, it turns out that the  plate was in the area of Main and Central in Peabody. Fortunately, there had been two paintings (1826/28 and 1848) of the area that helped fill in some notion of dimension. 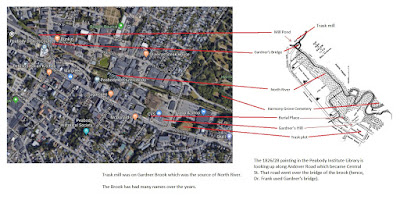 We're looking at a small area. The South Church was attended by the Gardners (Dr. Frank's and Ann's ggps). Thomas owned a lot of this land when he died; he had it by grant, or he had purchased lots, or he had quietly homestead'd in the context of the time since the land that he acquired this way adjoined his.

At the moment, I'm perusing Sidney's antiquarian periodical for all maps and text that will be pertinent to writing the proper story.

05/16/2019 -- Lots going on that can get in the way, but we persist. The first of many posts: Massey's Cove. This came about by seeing Henry Lunt mentioned on one of Sidney's maps in an area downstream along North River.