Earlier, we listed Thomas's (and Margaret's) children and grandchildren: Two generations. Then, we used one child to show a line from Samuel to Simon Stacy (DAR patriot): The progeny. Too, we mentioned that we will extend this Samuel line to Dr. Frank A. as we proceed. 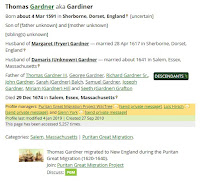 But, before we come forward in time, a few posts on the early times are in order. As one collects, for their tree those families who were early immigrants, the family count can go up quite quickly. Some of the interplays between families can be used to illustrate the points (RD, etc.) that have been discussed so far.

So, let's pick the Hathorne example. Here we can look at the descendants of two of the Gardner children, namely George and Samuel. Now, John Hathorne, the judge of the 1692 tribulations, married Ruth Gardner who was the daughter of George. It is from this that we get Nathaniel as a descendant of Thomas. Ruth's brother, Samuel (son of George), was the forebear of the John Lowell Gardners. Remember that the grandfather, William Hathorne, and father of John had come over with Winthrop (1630, Arbella).

Concerning the Hathorne tie, the Neuman-Smith-Goodale family has an interesting tree that shows a pedigree for both John and Ruth. The Ruth expansion, in this tree, shows Stephen which we saw earlier.

This post's research affords the opportunity to update the earlier descendants list in which Ruth was blank. We have two that we can show: Putnam, et al and Kathleen's Kousins.

Aside: the current mode is collection (there is a whole lot of material available) and rudimentary analysis which will strengthen as we proceed.

Now, another Hathorne tie is with Abel who is a grandson of Thomas, through Samuel. Abel married Sarah Porter. Her mother was John Hathorne's sister, Elizabeth. We can use the Neuman, et al, tree, from above. An interesting note is that Elizabeth and her husband, Israel Porter, led the unsuccessful effort to save Rebecca Nurse.

Now, that brings in Simon Stacy Gardner, again, who is Abel's grandson. We had pursued the RD example, using his mother, Phyllis Stacy (Neuman, et al). A Remark (12/06/2010) suggested, also, that there was RD via a White line. We can add another using the Elizabeth through, for example (as there are several), the Capell line (Bevan's work).

09/04/2013 -- Again, the scene is built as follows. Those who came over are from the 10th to 13th generations back (for the most part) for someone alive now. By the time of 1692, lots of the earlier arrivals had passed on. So, that left the second generation (again, for the most part) as the elders. Now, taking a cohort mix (generational cut) round or about 1692 would give us someone on the current person's tree who would have about three generations living (including the level of their own cohorts). So, we would see siblings/cousins, parents/aunts/uncles, and the greats. In other words, it's a composite person that is built from that cohort mix (meaning, of course, that being on the tree implies ancestry) for which we can identify relationships blood (including 1/2 blood), in-law, and even friends. What Marjorie's chart does is to take someone who is in the mix and look at extended relationships. Now, consider what we would have if we did that for a large part of the composite mix. Would it not be an interesting view?

Email ThisBlogThis!Share to TwitterShare to FacebookShare to Pinterest
Labels: 1692