Firstly, we have no photo of the house. The attached drawing has appeared in several publications. We'll run down its source.

The house was put together by material brought over by the Cape Ann party. With such a small crew, there would have been room for a lot of material on the boat.

We might say that this is the house that Thomas built. Evidently, the building job was completed in 1624. Possibly, that would have allowed some shelter for their first winter. Who lived in the house?

One researcher suggested that the overseers used the house. Tilly didn't have a family. Did other families share the warmer space over that first winter?

We need to pull together all of the stories that have been told over the years.

Of course, we can say this is the house that Roger Conant took over with his coming into leadership at Cape Ann, in 1625, after his sojourn in Plymouth and Nantasket.

Too, we can say that this is the house that John Endicott had taken over to Salem for his use. See Higginson's description of Salem including the 'fair house' for the governor.

Obviously, it was the first 3-story house in New England, perhaps even in the eastern U.S. Before saying that, we would have to look at what the Spanish did in Florida. Jamestown put more into their fort than the houses.

Of course, what did the other houses that use locally fabricated material look like? And, to what did Thomas and Margaret move when Conant 'confiscated' the house?

We can surmise the construction style by comparing the Thomas house with the one (shown below) of George Soule (a re-creation) which illustrates both the material and the construction technique.

A little later, there would have been houses like we see with Balch (Beverly) and Whipple (Ipswich). 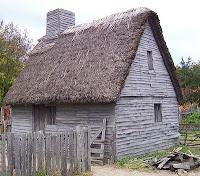 By 1626, the crew was on the move to what became Salem. Did they leave anyone behind in Cape Ann?

The house was not moved until later; was it occupied during that time? We know its location in Salem after the move. What eventually became of the house?

Finally, let's look at some of the economic realities, that will be addressed more fully, here and elsewhere, until we get the real story out there about Thomas and his kind (the real contributors).
That these economics considerations are pertinent in today's world seems to increase their potential interest.

Remarks:
03/19/2022 -- Nice to see research on the family of John Tilly. NEHGR, Winter, 2022 has an article on John and his family by Clifford L. Stott. The title is "Rev. William Tilley of Broadwindsor, Dorset, and His Sons in New England: John, Nathaniel, and William." Identifies his child and more.
09/28/2014 -- A week ago, the record for the marriage of Thomas Gardner and Margaret Friar was discovered in Sherborne by John Cook of Minneapolis, Dorset files. This sets a type of focus. Looks as if some transcription work might be in order.

01/25/2013 -- By the way, we're going to document this more thoroughly on Wikipedia - Great House (Cape Ann). We have John Goff's expertise available to assist us. This house was the first of its kind in New England.

10/24/2012 -- John Goff (Salem's Witch House ..., pg 24) writes: After his arrival downtown in 1628, Endicott ruled that the old Thomas Gardner "Governor's House" from Cape Ann (built about 1623) be dismantled, moved by sea from Cape Ann to Naumkeag and be re-erected in earliest Salem to serve as a new Governor's House here. It stood north of the old shawmut on what is now Washington Street.

12/17/2011 -- Tim Lambert's A World History Encyclopedia will be used much in this blog and in related material. Here is his description of colonial homes. By the way, we'll look at this, too. In Connecticut, where the cast offs (kidding) from Winthrop's world went, in part, they started to build big houses early. As in, the prototype for the American Mansion (and the McMansions) was worked right there south of Massachusetts. What was different? Multiple fireplaces, many rooms, large square feet, multiple cooking areas, servant quarters, and so forth.

12/02/2011 -- According to Felt, in the Annals of Salem, Endicott purchased, when he arrive, the house and have it moved from Cape Ann. Felt writes "It was then two stories high. Some of the remains of it are said to be still contained in the Old Tavern, at the corner of Court and Church Streets." Felt also mentions the reference to the house made by Higginson ("we found a faire house newly built for the Governor") when he arrived in Salem.

08/16/2011 -- We will be using the Planters' Plea (from White) to get some better sense of what happened in that early period. Only Endicott is mentioned by name.