As suggested in the Wikipedia article, Old Planters (Massachusetts), there are many types of old planters. In the case of New England, this Wikipedia article needs to be expanded to include many other places, such as Boston.

Earlier, we mentioned Old Planters with the context of a reunion at Beverly. Too, we broached the subject while asking about the history of the area, essentially Essex county. Research, to date, seems to indicate that a recap of mentions of Thomas from early times on might be an appropriate undertaking.

For this post, we'll make use of what might be the first publication of the Old Planters Society that was active during the early part of the 20th century. The book is on-line (archive.org, Google Docs): The Alliance between Pilgrim and Puritan in Massachusetts, 1900, Thomas Wentworth Higginson, Salem, MA.

The book contains an address by Thomas, the President, to the Society in which he looks at cooperative efforts, and the influence thereof, between parties who ventured over. These parties would not have been so inclined to such behavior across the pond. In essence, the coming over brought forth means to establish a new society, albeit troubled in many ways. The topic will arise again, in regard to Thomas' and Margaret's lives, so we'll leave it at those few words.

The real interest, at this point, is the summary of the Society which was instituted in 1899 (our task will be to pull together a more full history). Evidently written by Dr. Frank, the summary explicitly mentions Thomas. One thing in vogue then (many references which will be collected) was to cure the oversight of many people who were in the parties. That is, the historically covered people shadow the reality of the others (always has been the case - but, changes, such as we see with technology, indicate that this will not be so much so in the future).

See page 13; it says that "injustice" was done to some planters. It also uses sympathy which is not the intent here; rather, the focus is to establish a more full interpretation that removes the oversights, or, at least, explains their longevity.

The book has the Constitution of the Society. Article III, Sect. 1. defines an old planter as follows: lineally descended from, in the male or female line, a proprietor, a planter, or other settler in New England prior to the transfer of the Charter of the Massachusetts Bay Company from England to New England, in 1630.

The book lists the Officers and Members of the Society. Higginson was President. The VP was Dr. Frank. The following list is taken from the members' list and includes those who have Thomas on their application.
Some of the others may also be descendants (marked as **, we'll scrutinize the list, at some point) as they may only be listing a primary ancestor and not considering supplemental applications via other ancestors.

01/06/2019 -- At the 300th, there was a Pageant of Salem represented. In Volumes III and IV of The Gardner Annals, we printed the Table of Contents for all issues of The Massachusetts Magazine which last printed in January of 1918. 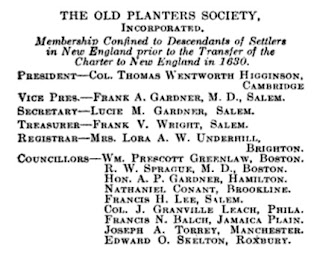 04/02/2016 -- Last summer, we went through The Massachusetts Magazine (Vols I thru XI) versions that are available on-line. "Old Planters" was a regular section.

01/01/2013 -- David Goss' talk at the 1999 Essex Society of Genealogists gives a perspective that also motivates. See the TGS bibliography.

12/24/2012 -- Thomas, unlike Conant, was not overshadowed in the world of being. We'll spend some time characterizing this fact and what it means to reasonable folks.