No shadow over Thomas

I'm researching for the next Beacon issue which will have a brief timeline of the lives of Thomas and Margaret (it does a grand sweep of their times and after all the way to today). Hopefully, it'll point to areas where we'll focus effort in the future in order to expand upon the theme so as to leave the proper legacy.

I can thank Rev. Felt for phrasing some thought (read today) that I've had for three years in regard to Thomas (see Backbone series). That is, Felt gave me the proper concept to use. You see, how is it that there is such a lack of information? How can all of the written literature be so sparse in regard to his life over all of this time (from the beginning down to recent publications)? Even Anderson, et al, (Great Migrations) seems to write begrudgingly.

The below image is taken from Thornton's (1854) The Landing at Cape which tries to document the experience at Cape Ann (which has a bunch of unknowns). This book references Thomas only once as the plantation overseer, with Tylly, at Cape Ann. And, it is in the beginning, as in, pre-Conant. Other than that, there is nothing (based upon quick scan - so I may have missed something - the issue would remain, even so).

Aside and disclosure: The wife of the blogger is a direct descendant of Thomas and Margaret, however she is also descendant of Conant and others of the old and new planters. One might say that I'm continuing Dr. Frank A.'s argument about the injustice, in general. We'll get to that in the Beacon issue.

Felt is talking about Roger's continuing displeasure at his treatment. But, the dear guy ought to have considered his treatment of Thomas and Margaret (he got the house!). The image quotes that Roger "retained a conviction of the great injustice done to him, even in his old age, and he could not refrain from reference to the neglect and ingratitude" referring to Endicott's arrival.

Notice that Felt says that "the new charter cast a shade upon Conant" which implies his followers (Balch, Palfray, Woodbury, Trask). A 1999 talk on the old planters of Beverly (we'll use this in the Beacon issue) said just that: Conant and his followers. These people worried that they might have been enslaved with the change in the power structure. It was so troublesome that Craddock had to address their worries, explicitly. Too, they were given the land in Beverly in order to bolster their spirits, so to speak.

And, old Thomas? Cool as a cucumber (as I've said, a guy who was effective, knew himself, and was the chief manifest'er of what was to become the American -- you think that London, et al, liked this?).

Now, none, nor any incident, that I can see, cast a shadow over Thomas. References to him imply dignity, respect, and more. On the other hand, he was ignored in writings, perhaps to put him in his place, as if that could happen.

Too, Thomas' stance was of the true American that we were to see develop over the succeeding centuries. One attribute of that stance was to be distant from the Churches (yes, plural -- ah, we can go on about that ad infinitum, but won't). Thomas was no follower; his blood and pedigree prevented that. 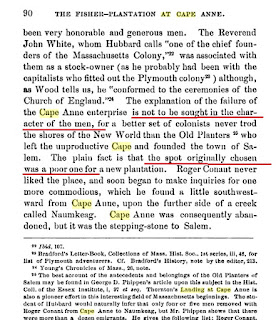 Now, too, his sympathy toward the Quaker thought, and the fact that his last wife was of that faith and that some of his sons were, to boot, talk of a mind that encompasses the shebang (put it this way: the every man view with both breadth and depth -- the latter, of course, meaning all classes -- those higher casting a shadow over the lower - hey, only those that you allow can cast a shadow over you). Yes, the Quakers were forward thinking and exhibited more than any a spirit of inclusiveness and peace (we'll have to get back to John Goff's take on King Philip -- we overlook, too much, our mistreatment of the American Indians - starting with whom? Endicott?).

However, we do not to want steal thunder from Gardner's Beacon. These topics all deserve careful study so that going forward we can have the proper view and respect for this UNKNOWN couple. As it says: honor thy father and thy mother (albeit transitively if necessary).

11/06/2013 -- While working on the next Beacon issue, I ran across some books. The one by Staloff was timely; imagine, I was wondering why the backbone series? Has the talented set ever allowed the lessors to have some semblance of a good life? Oh, you say yes? Winthrop, et al, were against this from the beginning. The stalwart of what could be (or could have been)? Thomas Gardner, of course.

09/09/2013 -- Forgot to update this earlier. But, the post related to Gardner's Beacon, Vol. II, No. 6, discusses that Thomas had no shadow over him as was feared by some old planters (would Dr. Frank, today, still want to include Thomas in the group?).

03/02/2013 -- This may have appeared in another post, or Beacon. However, we'll repeat the thing here. When Thomas took the freeman oath, that is, that year, he was voted to the General Court with Hathorne (see above, another great-grandfather) who was a swashbuckler. It is interesting that Thomas, after that, kept a more local focus. There may be many reasons. But, getting up close with the clamorous ones may not have fit his mindset. You see. Throughout history, certain people get written about. Yet, in any situation, there are teeming amounts of more people who are not in the spotlight. Now, do you think that not having attention diminishes your being? If you say yes, let's have a little discussion. Of course, we would have to define, up front, whose attention. Social media comes to mind; frivolous content that invokes brain altering reactions (say what? -- I'm happy that I'm not susceptible, being too many decades old, long-in-tooth, if you would) to those who participate. So, back to Thomas and William. You see. John Endicott knew Thomas. John picked on poor Mary Dyer and others. William probably did similar deeds. Thomas? There are not bad tales. Too, and this is a big too, he deigned to be involved with people who were outcasts, namely the Quakers, as were his sons. Now, the sons left. Thomas was right there in Salem, of major stature in the phenomenal sense. Actually, his recoil (my take which can be explained) from the politicking tells a lot; it has a lot of meaning, not unlike George (the first Prez) stepping down even though he was adulated sufficiently for people to want him to be sovereign (thank you, George - for showing us that term limits ought to be part of the deal - professional politicians? say again?).

02/10/2013 -- Having finished a book on the 1692 events and doing a post on the subject, I can add to this look at Thomas. I've mentioned that he didn't queue right up to join the church and that he was recognized by Endicott. As well, he married a Quaker without any repercussions that we know of. Of course, his sons left the area due to the Puritanical (hypocritical) mindset.

01/01/2013 -- David Goss' talk at the 1999 Essex Society of Genealogists gives a perspective that also motivates. See the TGS bibliography.

12/24/2012 -- We'll also point to academic studies, such as that shown in the image (Essex Institute and Johns Hopkins University). It says, don't look at the character (ah, John White? uncle? who needs enemies with family like that?) but consider the place as not appropriate (no aspersions meant for the lovely Cape and its environs).