As mentioned before, we want to spend a little effort getting information about the earlier times before coming toward the current era. For instance, we can take some time to look at each of the kids and their offspring.
Sarah, the oldest daughter, married Benjamin Balch whose father, John, was one of the early planters who came over with Thomas Gardner. This group helped establish the area around Salem. 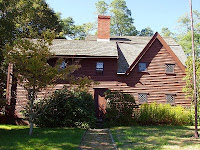 There is a house in Beverly, called the Balch house, that has been dated to about 1680. Part of it may have been built by John. Sarah and Benjamin were occupants, to boot.

Notes from Balch family reunions, some of which were attended by Dr Frank A Gardner, provide stories of interest. For instance, Benjamin, born in 1743, was the first Chaplain of the Continental Navy.

Another descendant, John Henry Balch, was awarded the Medal of Honor for his actions in WWI.

One pedigree for Rev. Benjamin, who descends from Sarah's son Freeborn, includes the Woodbury (another planter) family (Kappus). The Vaut pedigree has an interesting extension for Thomas.

Children (according to the NEHGS and the Great Migration Project - as represented by WikiTree): Thomas, George, Richard, John, Sarah, Samuel, Joseph, Miriam, Seeth.