Back in April of 2015, we did a matrix of metrics related to posts per month. The blog started in September of 2010. So, that four complete years and two partial years. The month and year that had the highest number of posts were marked.

It goes like this. Read and read. Then, when some threshold is met, write. Given that the blogger is a novice in this area, there was more reading than writing. Good sign? So, the two years that had a month with a good number of posts were 2011 and 2014. So, what was going on in those months? Well, we can look at the title of the posts and get some idea.

Also, note that the blog uses Remarks which can be quite extensive. So, rather than making another posts, most of the time, there is something added to an existing post. We'll go back and see which of the posts had the most extensions over the years.

So, going forward, here is a report that adds in the other years. It provides the table of counts and then, shows the titles of the posts for the months that were maximum for the given year. 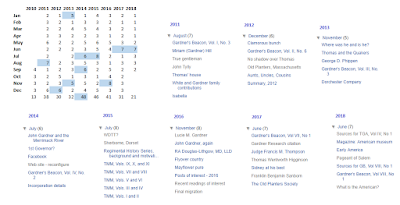 In August of 2011 (seven posts), the topics covered were contributions by John Goff, mentioning of Isabella of the museum, taking notice of the house built in the first year in Cape Ann, and a few other topics, like Gardner's Beacon, Vol. I, No. 3. But, note that there is a post which is titled 'True gentleman' that will be the topic of a coming post and article. It has to do with the fact that Conant was patted on the back for giving the reins to Endicott when he arrived. He was called a gentleman for letting loose of the power. Well, prior to that Gardner bowed to Conant. And, he and Margaret (we can use that name, folks) moved out of the house. The house? Yes, the one that Higginson, later, exulted about in his writings about New England. It was the fair house where Endicott provided a feast for Winthrop when he first arrived.

Note: all of this was written in various posts and in articles in Gardner's Beacon.

So, we'll get something from that review. Now, going to 2014, there was July and September with six posts each. In July, the posts dealt with John Gardner's early years, the source of the 'first governor' label that someone attached to Thomas, and issues related to Gardner's Beacon (now in the fourth volume) and the website. But, incorporation details were being wrapped up, to boot. So, that was a varied lot.

In September, the topics were The Gardner Annals which was in Volume I and provides our means to report research activities and finding. Guess what? That was the month that John Cook was querying about 'whence' issues and noted that there was a marriage notice that had been digitized. At the time, I posted the news at WikiTree (see the tree for Dr. Frank). This year, there was a discussion about the three wives proposed by Anderson of NEHGS, however we can now show that there were two.

We took these two years, 2011 and 2014, since they were covered in the earlier post. Next up, we'll look at the remaining years. In the meantime, the table is through September of 2018.

Note: at some point, will put in links to posts dealing with these subjects.