In this context, last time, we looked at Gardiners Island which was owned by one of the many families that came over early. Dr. Frank had Lion Gardiner on his lists. He had more families in his 1933 book than he had in 1907.

Other families have been added. The list in the "Gardners and Gardners" post (see Context) is being updated. Of late, we have been working with a member of the Gardner family of Pennsylvania to organize and publish information that ought to help throw some light on origin issues, both particular and general.

The following is a summary of what "King Slayer's Court" is all about. The recent finding of the remains of Richard III allows another look at several subjects that deal with the Gardners of London. Our interests are several. There may be a tie that is awaiting discover, even if it is further back in time. Too, history has taken a stance in this matter that may not be correct. 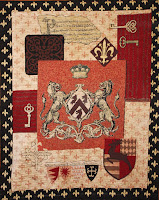 I’ve heard stories about William Gardiner and the King since I was a child, I’ve been researching and reading about the subject ever since. These stories were passed by my family, descendants of English traders.. Many stories, music and traditions of early families passed generation to generation, made their way down the trail with the westward expansion of North America. The Welsh Tract of West Jersey. This area is now known as the city of Philadelphia. My ancestors English traders arrived in 1682. They were masonic masons, traders and merchants..

In the early days of the web, back in the 1990’s, I approached the subject of William Gardiner on Netscape and AOL. The “King Richard” protectors screamed preposterous all the way to Bosworth Market.

However, let’s look back in retrospect over the last 30 years and see how this story has progressed. My query has gone from completely preposterous to right on target. According to studies done when Richard III’s remains were found, in 2012, the last English King to be killed in battle fell by a blow to the head delivered by Wyllyam Gardynyr, a common skinner, with a poleaxe. “Hog Wash” of 30 years ago was confirmed to be true.

I find it interesting that the stories that families have passed generation to generation on the Welsh Tract of Pennsylvania (the tales of Lords, Ladies, Kings, Great Battles and better times in England) have ultimately stood the test of time. As we enter the digital age and the information of past generations is uploaded, it seems to be painting a picture that has been left unfinished for many generations.

We live in exciting times, my friends. Even a single forgotten document, just one seemingly unimportant piece of information now scanned to the internet~? Can (should) cause us to examine everything we think we thought we knew about our history. This is the story of King Slayer’s Court. I intend to publish what I have heard; then, we will go back and provided references so as to establish the proper story.

This following lists a few facts about William and Richard Gardner that we will address further.

Several items of interest come from this overview that we can pursue. An example would be the differences between views: Wikipedia (Gardiner not mentioned) vs King's Slayer Court. History is more than what is written. Too, some viewpoints never get expressed.

06/20/2018 -- This will publish with a new article soon. The book will include The Gardner Annals, Volumes III and IV plus Gardner's Beach, Volumes IV through VII.