Two years ago, we received a query about Gardiner, OR. The question was: for whom was the town named? While getting information about the town in Oregon, we went through a list of places in the U.S. with the Gardner (Gardiner) name.

Turned out that Henry D. Gardiner was the namesake of the Oregon town near where his ship (barque Bostonian) wrecked in 1850. This Henry was a descendant of George of Rhode Island.

Lately, I have been following trails west in terms of the long reach of New England (both north and south). Travelers going west who left from Independence all went by Gardner, KS after which the Santa Fe and Oregon Trails split (Gardner Junction).  The town was named for the Governor of Massachusetts, Henry Joseph Gardner. This Henry was a descendant of Richard of Woburn. 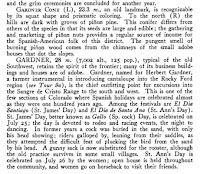 Today, we go to the region of the Sangre de Cristo range. This impressive range was visible to those who took the northern part of the Santa Fe Trail. Rather than cut down toward Las Vegas, NM, the travelers went west and joined up with traffic coming south from Denver and other northern points.

On their way south, the wagon went through what is now Walensburg on their way to tackle the Raton Pass. A mere 30 miles or so to the northwest of the Walensburg area, we find Gardner, CO.

The area has a long Spanish history. The Spanish Conquistadors visited. Settlement from the east began in the 1850s. The Post Office had the Gardner name in 1871. The town is named for Herbert Gardner who was the son of Governor Gardner (MA). So, Herbert was a descendant of Richard of Woburn.

The below list is of interesting reads about the area. Some have photos of the area, including a landmark named Gardner Butte.

This site brought together two old cultures. Santa Fe, which is south of Gardner, was the mainstay of northern Mexico from the 1500s. The trails carried travelers from the east on their way west. As such, the trail travelers had covered more miles.

There are a few more Gardner locations in Northern America for us to mention.

08/07/2016 -- Gardner, CO is at the entry of the Wet Mountain Valley. Herbert Gardner introduced agriculture into the area early.