TL;DR -- While researching we saw a pamphlet from the State of Missouri with respect to their history and to availability of records. The history included several maps at different times which show the carving up of Missouri Territory into counties. By the time that Missouri became became a State in 1821 there were only a few counties. Others were defined over several decades. St. Louis hosted a World's Fair in 1904 which was the theme for a Judy Garland movie.

This is a brief post with a few maps which are to show just how quickly things were changing out in the west where we can use St. Louis for a focus for a while. Before jumping ahead, here are a few pointers to related information that pertains to what the first map (below) shows.

So, we start with an overview. There were three areas still to be handled in the northwest, name Michigan, Indiana, and Mississippi. These, btw, are east of the Mississippi that sets the eastern border of the Louisiana Territory. 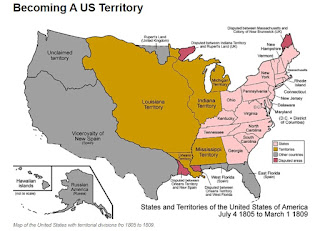 The next maps are local to the central/right region dealing with the area around St. Louis. We start with a 1804 look with names from New France and New Spain. The culture there of St. Louis is as aged as is Essex County of MA, for example. All of these maps come from a little book titled Missouri's Public Domain: United States Land Sales 1818-1922. We were thumbing through a copy of this today and are happy to find it online. In several other publications, we have seen a history of the area from several sides, such as Missouri or Arkansas or other. Some of these were quite detailed. This is quite direct and oriented toward sales.
By 1812, what Louisiana brought was under siege by newcomers. By the next year, Arkansas was under consideration as it was being carved out of New Madrid. In 1799, Boone, himself, was in the St Charles area. He was involved in the local area. There is a tale that he went up the Missouri River, as far as Yellowstone which is remarkable for someone in their 70s.
In all of those maps (1804 thru 1813), one can see the Missouri River cutting across the top. In the middle two images, it is the top boundary of the St. Louis County which extends from the Mississippi River on the east to the left border. What is there? The next map from 1816 brings in the west and the north. A Howard County picks up the Missouri and extends the northern border above which will be Iowa.
Then, in 1821, we see the initial look of the State of Missouri. Howard is cut down in size quite severely. Boone gets a county named for him in middle of the state along the Missouri River.
Anticipating the movement further west, the activities of the Trails which flowed through the Kansas City area will be in Ray County. That is, as we will see, lots of traffic came down the Ohio to the Mississippi and then went north to St. Louis and west on the Missouri. It was at Kansas City where the focus changed from water to the toils of laboring across the landscape.
All along these ways, we had families seeing something they liked and staying. Or their decision was the result of any number of issues that could have arrived. The net effect is our Frontier Century.
With a nod to culture, St. Louis hosted a World's Fair in 1904. It's theme was the Louisiana Purchase. We have a lot more to look at with respect to the century and what it entailed.
In 1944, there was a movie titled Meet me in St. Louis. We can look further for New England references, but one of the stars has plenty. Namely, Judy Garland (Famous Kin).