All that Louisiana brought

TL;DR -- Jefferson bought land west of the Mississippi. It and its watersheds to the west were serious barriers to movement. Yet, people endure and overcame. This whole region is full of descendants of early New England folk. We study the families and situations in order to fill in history with a personal note.

Incidentally, this continues a series related to western expansion. Efforts to move west started as soon as people were here, even before Winthrop. He arrived at Salem, didn't like it, went on to what is now Boston. This theme will be constant. Why? It honors all of those forgotten heroes (male and female) who got this country going, starting with the arrival of Thomas's crew at Cape Ann. History can look at the topmost issues; we will be looking at the nitty-gritty which is very much overlooked by many in this day of technology that entices yet offers no reality (yes, that is a focus, too, that we will touch upon).

We have been trying to follow a few threads of families out of New England (upper right of the yellow region) to the south and to the west. As we do that, we have to consider the situational aspects with respect to culture, history and technology. The periods that we are looking at now run from the French Indian War through the Revolution and then through the War of 1812. That would be generations four, five and six. The location would be the east coast until after the Louisiana Purchase during the term of President Thomas Jefferson, the second President from the south. Before him had been President George Washington and President John Adams.

So, we are not really paying attention to the larger picture as history has done a good job of that. We want to follow lots of families and consider the situations until, say, 1900. Or last post on this subject looked at Grizzly Adams who went from New England to California and back. Lots of people did this before Grizzly and continued to do so without cessation, even until now. One can cross the whole of the continent now within a matter of hours - without breaking laws such as speed. The record is under 28 hours. Imagine that if you were Daniel Boone who established one route. Naturally, he followed the American Indians who had been here long before. We will look at that, too.

So, this map shows what was obtained in the deal that Jefferson did. In our posts, we have touched upon this area quite a lot. Take Kansas. Col. Higginson went there before the Civil War to help the free staters. John Brown was a friend of his. Before that, Jedediah Strong Smith was killed in Kansas. Those folks were New Englanders. About the same time, an itinerant came out of the south and was in the same area: Joseph L. Walker (1798-1876) - see the post on Grizzly Adams.

For now, let's just consider another map which was in the post on Cumberland Pass. 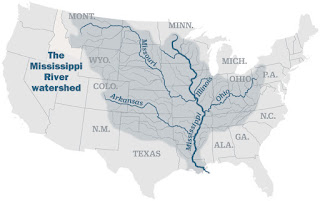 The top map shows the western extent of the Mississippi's watershed. The extraordinary thing is that this was French territory and that it had been visited early. We will step back and look at that in the near future. Right now, we are focusing on the time from the exploration of Lewis & Clark that started in 1804. One thing to note is St. Louis which is in an area first explored in the 1670s. That was the period in which Thomas died. The river provided the means for movement. One thing to look at is the exploration of the rivers that feed into the Mississippi. Lewis & Clark went up the Missouri. People arrived from the east via the Ohio River. It's amazing that the eastern reach of the Mississippi is in Pennsylvania.

Also, all of those wanderers that we have looked at so far went through St. Louis on the way to and from the left coast. Tales from the interior tell us a lot. We want to identify families and their groupings. Fortunately, lots of descendants fill the area.

02/15/2021 -- We are looking further at rivers as means of transportations as well as being barriers starting with the Mississippi River system.
02/27/2021 -- Further on the western rivers (and the Missouri River). Changed to using American Indian.
08/13/2021 -- Updates: Gloucester after Weymouth for the 400ths. The 250th of the sixth generation? SAR/DAR. 200ths: Michigan, Carving the land, Missouri and the west.
Posted by AJSwtlk at 6:13 PM