Just updated the posts counts which looks at each month and year, from the beginning. This is only one blog which deals with content of various natures. As the last post noted, we have several configuration concerns to handle. Actually, everyone does.

Aside: Before the 'cloud' came about, companies had fairly specific configuration modes that needed attention. Some bought services, but any group with significant intellectual property took care of it. With the cloud? It's a new game with a lot of fiddling and fuddling. But, as with life, we should always be learning. Now, the TGS, Inc. content, at this time, is fairly particular and of a minor scope. That will change, hence our thinking of the issues now. Too, we can discuss issues generally without our feet being in the fire. Would not want that.

There is a new line in this report (first mentioned for August) that shows the number of posts per year accumulative to the end of October. The 'blogger' (Google) sets the stage with this as we don't own the clock. Yes, one benefit of the cloud is to offload worrying about such issues. 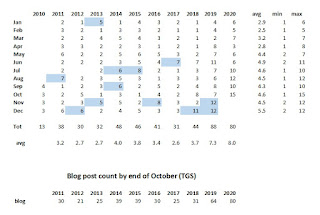 Aside: That users just blithely figure that all of this is handled by experts can be an issue, especially if you want your company to do well (unfortunately, the web was let loose in a wild west mode from which we have never recovered - something about 'genies out of the bottle' that we all seem to find generation by generation. So, this is not something to take lightly.

In earlier posts, we mentioned the amount of work being done (say, Presence and such) which also includes research on a regular basis (technical examples: Technology and content, Spectral issues, Techie stuff, ...; New England gone south, ...). Mostly, this type of work results in things taken for granted until there's an issue. Even with decades of experience, we don't seem to foresee very well. Actually, switch the context to the financial realm to note what we're referring to (say, the U.S. Fed).