TL;DR -- As we look at descendants, we cast a wide net including looking at those who have been identified by others. Except, these need to be proven. This is one case where the likelihood appears to be strong if someone does the work.

Note: We started this post in an incremental fashion that was following up on a suggestion. For now, this is informational only and about a potential descendant of Thomas and Margaret. We had a similar incident with the 'Descendants of Samuel' page and left a note that points to a post about frontier issues. These are there for the middle ground (western expansion) folks and families. This particular one here deals with a family that came out west from upper New York. They had lived on the border of Massachusetts. On the MA side, we are talking Berkshire County, most likely. So, these two locales are close. More at the end of this post.

There have been lots of these types of tinkerers over the past 400 years. Names stand out like Ben Franklin and Nath Bowditch. But, there are lots more. We have been going through the descendants of the children of Thomas and Margaret while covering the time from the beginning. Themes arose like generations where the 4th and the 5th bore the brunt of the Revolution. We picked the 5th since it matches up with the GSMD books. But, we can follow those generations forward and backward.

So far, we know more of Thomas, George, and Richard. We know less about John, Sarah, Samuel, Miriam and Seeth. Despite Dr. Frank being a descendant of Samuel, we know less of his descendants than of the earlier boys. And, we are starting to fill in the gaps. This post is about a descendant of John. However, he also is a descendant of many families of Nantucket.

Who is he? William Coffin Coleman was the founder of the Coleman Company. There is no American Boy Scout (probably male, too) that has not run across his lamp and other paraphernalia which is often associated with the outdoors, camping, fishing and such. This is a landlubber post; we will do more naval looks, too. 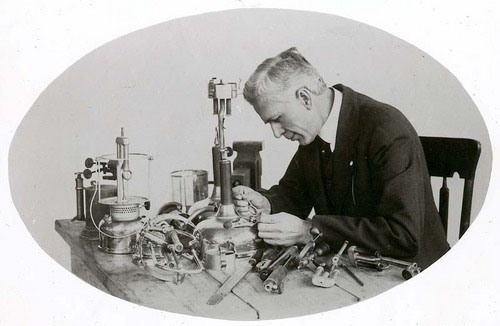 William was born in New York, but his family moved to a southeastern country of KS. That area was oriented toward farming, but it was also how trains ran from points (ports) in TX to Kansas City and Saint Louis. As well, there were various types of mining (coal, chemicals) going on. His bio (Wikipedia) notes that he was in several places before he ended up in Wichita KS where the company was founded and existed for several years.

We were looking at William with respect to John. See below.

When we got to this point in the post, we went looking, again, and could not verify this line. Now, the last point of knowledge is the FindAGrave of William's parents. His father was Robert Russell Coleman; his mother was Julia Coffin. Robert and Julia were both born in New York. In the 1870 Census, they are in New York, still, and have his mother (Anna) with them. So, given the families, Coleman, Coffin, Russell and a couple of others, one thinks of Nantucket (then Gardner comes forward). However, there were Coffins in Essex Co, to boot. Both Robert and Julia are the 6th/7th generation.

We have seen lots of frontier situations further west. This case is nice as it's like a lot of others seen and handled. Even in the east region (Essex Co), we have had to track people through different little locations. In the west, we had families out there early on. Ipswich (churches thereof) sponsored lots of pioneering efforts (need to get the old notes back up to fore - we're trying to curate through zillions of little data bits collected over a decade via the sea of the internet). Ann's greats were out west (upper New York) for a while and then back in Salem. One avenue would be to find a family where Robert fits. Reminds us of New Hampshire. In one instance, a kid was noted but said to have left the area. We wandered in the material westward and found that he put roots down elsewhere. Much like Lyman. Born in MA. Buried in a lonely area out west. We can track his steps in-between. He's fine. One daughter of his is ignored since she died young (being followed by a step-mother for her young daughter). No paper trail. Wait! We've been down that path. Our goal? Get these people, categorically, considered in a more proper light. For one, it's the American thing to do; too, it's the 'honor' part of that old adage that might have more basis than many allow.