The internet has changed things tremendously, as we see with this last holiday season where bricks and mortar continued to suffer at the hands of the ease (and such) of the virtual shopping experience. Then, we see how the internet has adapted to the facility of mobility. The Economist, recently, looked at how the internet's offerings have changed how we get news; and, there is a wide gap twixt what the older folk do to, and how those younger, get their information.

Many societies are in the midst of trying to figure out how to obtain a balance in regard to presenting their information or to finding what they need, in a manner that allows generational peace and harmony. We are considering our options and will venture along a few paths this year. First, though, let's review what we have now. 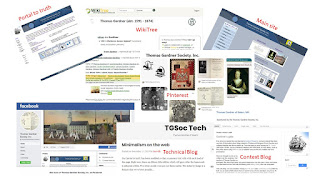 Need to add in GitHub. One thing that the Thomas Gardner Society, Inc. will not do is buy into some service without consideration of pros and cons. Too, these will be documented. This might cause a bit of delay, but the future, to be secure, demands this. And, we are trying to provide interesting technical work for those who might be available or who want to learn about the ins and outs. GitHub is one of the facilities where developers hang out. Whatever processes we come up with for work management by a group will use GitHub, or something comparable.

Future alternatives would include other types of media than what we have addressed so far. However, let's look at a picture. In our post on Houses being Homes, we suggested that one could use Salem for some very good experiments. Given that many pieces of property were in the same family for year, we could follow that thread. Also, we could do modeling (next) of sorts that would provide more information that one can get now. It turns out that the Gardner family has lots of examples. We can branch to other areas, such as Nantucket, Maine, and even west.

Let's take Salem, though. We already mentioned with regard to Thomas' grave. It is missing. We could model with with the facilities of virtual-reality tools. At the same time, augmentation would allow us to present historical information in interesting ways.

All of this would take work. However, the cloud and other computing facilities are there. Some of the technology being developed for gaming would be apropos. Some of this has been on the table for discussion for some time. Of late, discussions about the Downing-Gardner-Bradstreet house bring the topic to fore. I am referring to Ann's house. It was featured in the Streets of Salem blog: First-Period Fantasy. This would make a very interesting case for a historical deep dive. So too would the 1st house put at Cape Ann by Thomas' crew.

BTW, part of the technical focus would be to get the younger set involved. With respect to learning, we have an endless set of things to do. Some are harder than others. But, there is nothing that would prevent anyone with the motivation to contribute their effort.