TL; DR -- Dr. Frank's TMM had a regular column on Massachusetts Pioneers to Michigan which we knew about but did not probe deeper. Now, we get a chance as it took longer to get areas east of the Mississippi settled than it did Missouri and Arkansas. So, we will look at both sides of the big river for a bit including a look down south with Louisiana and Texas. Per usual, we relate things to the event of 250 ago after which the developments under study occurred. And, to lessons not learned yet; the context for these change with the times; will we ever learn?

In The Massachusetts Magazine (1908 to 1918), C.A. Flagg, of the Library of Congress and friend of Dr. Frank, wrote of the Massachusetts pioneers to Michigan. We did not really pay attention to this until now. The last post (Practice for carving) mentioned that there were two situations, as we might think, namely east and west of the Mississippi River. Our focus has been on the latter. Now, we have a chance to step back and look at the former.

One motivator is the event called the Toledo War which was a verbal conflict between different parties for a strip of land that bordered Ohio and Michigan. Michigan State University provides several maps in their paper part of which are in this composite. 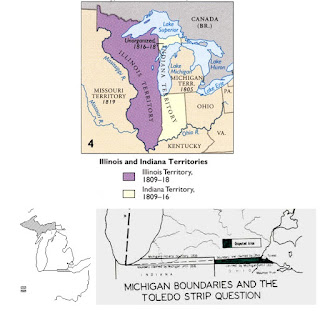 Another motivator is running across a family one of whose ancestors bought land in the Michigan Strip, according to the records of  the Bureau of Land Management which records we used for studying Missouri. As the west was carved, there was paperwork to be done. Too, surveying was a big time business. One early practitioner was New Englander Silas Bent. His son was at several meetings with the American Indians with respect to peace. So, that is a topic to look into, as well.
All of this relates to the long reach of New England, across the interior and the seas. As an aside, in terms of families, the non-logical genealogists have dissed all sorts of families. We will get to that, as it is John's area. Not genealogy. Rather, modeling, problem solving, philosophy of mathematics and science and the related subjects including deep knowledge of computing (all aspects) and that wannabe called AI which has raised so much mania/angst and glee/euphoria through fairy dusting that comes from too much SciFi, fantasy, and sheer unrestrained imagination.
That is one of the major TGS subjects for research. One might add mental health with a nod to the pair who fled the UK for the US last year.
In any case, we will pull out the Flagg articles so that they can be used. One family was in the same spot but was, over the years, in Louisiana (lazy mode, we suppose) and then two counties in Iowa. Same goes for the Strip. And, we have not looked yet at the many other States that were populated after the colonies split from the Crown.
For those being dissed, many died young, like the case for the Mayflower where a stepmother came along and muddied the waters. Then, the father died young, too, leaving his infant (whose mother had died early, too) with the woman who ran off, but her uncles saved the day. Then, a modern mind touting its genealogical expertise (a scientist, to boot) could not rectify the facts. This is too much of a general problem, folks. John has now 10 years experience of bouncing against this mind set. Too, those who look are talking the general problems of computing and knowledge, especially that at the higher relams where people really ought to know better.
BTW, note that Anderson of NEHGS had everyone thinking of three wives for Thomas. Okay? Look at WikiTree. We now have it back to two (Margaret and Demaris) with some work being done to fill that picture in further.
Oh yes, Missouri was settled in 1821, somewhat, though it took a while for the counties to shuffle to their modern definition. The Strip was still being contested (conflicted) until 1835. That would have been about the time that Texas was rumbling with respect to north and south, as in, European cultures over here with their pissing contests. We will be stepping down there, to boot. Got to love Texas, people.
Michener, in his research, noted that the Mexican War was really a training ground for the Civil War. Dr. Frank noted that the Crown trained the U.S.ers in the conflicts with New France and its American Indian allies (so called French-Indian affairs) so that they could rebel. And, we are now approaching the 250th of that. Lucky us. We see that New England's experiences will be needed to keep things straight due to so many opinions based upon things of little to none provenance. We have to correct that over time in order to frame a better story for future generations.

12/16/2022 -- Finally got around to looking at the first steps west which were driven by Ipswich MA. Also, Rutland VT was involved. See Perspective, a necessity.