TL;DR -- Ipswich has been a topic from time to time. It had shipwrights. Of course, different size of vessels were handled. There were no biggies like Boston (MA) or Bath (ME) or Norfolk (VA). Other examples of industry and technology can be used. But, Ipswich led the way to the expansion across the interior that we saw for over a century. We will be looking at that, as after all, New England has a long reach. Ipswich has done well for itself.
---
As technology runs toward the future, we always get to states where we get locked in. We cannot go back. Technology is great, except for when it doesn't work. If the problem is solvable, then we have a glitch and a correction. If the problem is systemic or not resolvable within a reasonable timeframe and costs, we have adjustments rise as imperatives. Learning drives technology; unlearning drives recovery from technology's failures.
The U.S. is about the best example that we have for several reasons. We have already addressed technology as being our main focus. We have 400 years of data to ponder, in this regard. But, just those pieces of evidence from the past 250 years is worthy of study, too. And, commemorative moments, such as we are having now which will last decades are a time to reflect and learn from the past. We are surely in a different mode than the generation of the recognition of the 300ths.
Today, we are featuring Ipswich which does not come to bear until later, but it does involve Essex County. Reminder, Cape Ann (Gloucester) has their moments in 2023.  It was from Ipswich that a group went west. Gen. Rufus Putnam (Wikipedia, WikiTree) was one of the leaders of the effort. Let's look at some particulars.
Historic Ipswich is a website that has been quite a motherlode of information. Of course, we are interested due to the many families in the heritage who had Ipswich connections. For one, Rev John Wise has an interesting bunch of  events in his life that we can learn from. We have been looking at shipbuilding in little Ipswich as well as similar work in the County (see Newbury Essex County MA).

The website has looked at Putnam's effort: Ipswich to Marietta, December 1787. First, they show the result of contention between the States with regard to this unsettled land to the west. We mentioned that in the last post about Family Search and their great support for research. Then, the post has the photo of a plaque that notes the endeavor. What? That got our attention, as we have been looking at the western expansion and its frontier century, including lost generations that plague genealogists who have no imagination. Why say that? These people were. Some were newcomers, true. Many were representative of the long reach of New England. Along with technology (and its specifics), our interest deals with identifying the examples of that reach plus the evidence now of its continuing existence.
Then, the post looks at an effort in 1937 to redo the trek while documenting the effort. For one thing, they provide the map that gives details of the geography. That was great to see as we have looked at the west and its rivers and its great expanse and the carving that was inevitable. Lots of this was with a focus on St. Louis, the gateway. Putnam kept a journal. There were other reports written. In short, it was a great find that was more special since it involves little Ipswich (influence a huge multiple of its size).
Now, let's look at perspective. Technology makes people lazy; oh, managers will say that it increases productivity. In terms of the former, heard of AI? It's a huge scam which we will show as we go along. Yes, balancing mathematics with knowledge with respect to culture that the broad history of U.S. allows. After all, we are a nation of immigrants. Luckily, we have two broad scopes, related to the colonial times versus later. Too, we have cultural associations with the old countries, for the most part. The list goes on and on. So, expect this theme to be recurrent. BTW, that which is being touted as AI is merely fancy math being exploited by computational prowess that came via modeling founded on (guess what?) mathematical modeling and the detailed work over the centuries. Yes, we will to touch upon all of that.
For the time being, we will present the following map with some commentary afterwards. 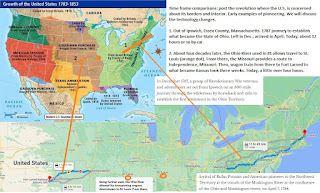 This graphic shows a map from the prior post which has one view of the partitioning before the carving that was involved in establishing the States.

1) deals with the Michigan Territory (again, the prior post) that we just offhandedly dismissed as practice for the carving. Our only excuse was that we were dealing with the broad expanses beyond the Mississippi River, but that was not correctly assumed. We have to step back given that the focus of DAR/SAR is the upcoming 250th of the U.S. Besides, we have to give generations credit. This deals with the fifth and the sixth where the latter is the first of those that were heavily in the lost side of things.
After all, people moved and did so quickly, once the way was set. Say, thanks to the likes of Daniel Boone and Jedediah Strong Smith. The former was doing his exploration prior to the Revolution. The latter was directly connected with St. Louis and its influence. We will go into that deeply.
A point to make is this: that trek from Ipswich was difficult. Hence, there were real reasons why it took months. In fact, it was practice for the challenges of going even further which was all the way across the continent. On the right is a modern image with routes and times. Even today, travel is difficult. Try driving diagonally across West Virginia. It's fun; but, don't expect to make record time (except, perhaps, max time which is open). Those mountains run further north. By the time that they would use the Ohio, they had already trekked some distance.
We will take the time to go into this further, since it does set the stage for later developments out west.
2)  This view trails the other by only a couple of decades. Missouri, the starting point, was a State in 1821. By then, most of the issues related to the green area had been resolved. But, it was 1804 when Lewis & Clark did their venture from D.C. through St. Louis to the west coast. At that time, mountain men (trappers, explorers) and American Indians were mostly in the area. Except, that had been activity from the west coast in (New Spain), some of which got away from the coast. Too, the northern explorers had been more adventurous than those of New England. Boone in the south went further west than did those up north. Lots to discuss.

Taking the same approach, notice that we are now in the middle of the country covering only a fraction of the area. Here, the issue is that folks would have followed a similar path down the Ohio River to the Mississippi River and then St. Louis and finally the Missouri River west. But, that was on to a starting point. There were several trails. This example uses that which went to Santa Fe in New Spain. One thing to note is that Santa Fe was the terminus of another trail that came up from the south. Too, there were trails out of the east through Texas to consider.

But, taking that one small portion which involved about four hours of driving now, it took three weeks for a wagon train to cover that area with a daily grind of a few miles. Notice, too, that we are talking the plains portion which is supposedly flat. It isn't. You can still hurt yourself by falling off of a cliff at various places.

In all of this travelling, rivers were both a barrier and a boon. In these graphics, they are not shown with any clarity, but, even recently, we have seen examples of traffic snarl ups due to bridge damage. One time, we were across the river from where we wanted to go. Okay. There was no ferry. This is a form of technology to note. So, the solution, since we didn't have a helicopter that would pick up the car and deliver us to our destination, was to backtrack to where we could follow a road that went over the river and then get back to where we needed to go which was a stone's throw (well now, as it was broad).

During the times before bridge technology really advanced, one waited out water. Incidentally, here in the west, there are uncountable number of places where high water will stop traffic. And, in many others, the water comes up to the edge of the road. One hopes that the road engineers did a good job with the base. And, that's not mentioning storms such as we will be seeing with winter setting in. It does not even have to be like the recent dump on Buffalo, NY. A few inches can be catastrophic.

Oh yes, real examples. There is a method to that madness. AI and other computer has gone off the rail since a proper basis was lost. Yes indeed. We have seen so many examples of modeling gone wild (like the kids at spring break) due to a lack of grounding which comes about for several reasons. One of these is a lack of respect for the need. Some of that might be generational; a lot of it has to due with the computer being too new for us to really have a grasp of how truth engineering is necessary. Too, what John von Neumann wrought will bitt us until we learn several lessons that have been pending for a long time.

12/16/2022 -- Rutland VT is hosting the Smithsonian's roving display:  The Smithsonian comes to Rutland. They are reading and discussing McCoullough's book The Pioneers as Rutland is on the pathway west.