TL;DR -- It has been twelve years since we began our effort. The 400th is now showing on the horizon. It's time to stop, reassess, and prepare for the future. Definitely, we can compare what we know and how versus the comparable periods in the past. At the same time, the 500th and its requirements can be considered. As, a 100-years focus for a project has come forth as necessary for us to do technology correctly. That is one focus that we adopted.

In Massachusetts, Gloucester is starting their 400th in a mere 22 days. Can you believe it? Here is a link to the stories that they have been collecting at their site (www.gloucesterma400.org).

When we started this work a decade ago, we had a lot to learn which entailed reading, on-line, in libraries, general books and articles, plus visiting places to get acquainted. Along the line, we have posted here plus put out the Gardner's Beacon and The Gardner Annals. And, we have corresponded with lots of people. We have two websites and several blogs. We wrote on existing topics (Charles Olson, Worcester born and of Gloucester by choice) and ventured into other areas, such as technology. 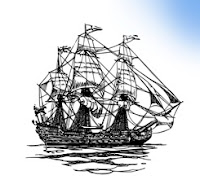 Back then, our timeline started with 1624 as that is what Dr. Frank used in his books following work being done in England. Since then, there has been other work done that added more flavor. A crew stayed over for the winter of 1623/24 with an arrival the next spring of another group of ships (one of which was the Zouch Phenix). Thomas Gardner is mentioned as being on a passenger list, however there are arguments that claim no such list existed. Margaret Gardner was noted for not being the mother of the children mentioned by Dr. Frank. That was clarified further.

We have more tools now, such as WikiTree's support for genealogy. But, we saw lots of other work and must gather these to create a view of the knowns as of this time, the 400th. We can remind ourselves that the 200th was coincident with the start of the new country, U.S. In that regard, we have been setting up means to know how New England's influence has evolved over the whole period since the colony started and from the beginning of the country that we know. That involves knowing more about the interior and its history.

But, as we came through the years, things stood out so as to allow us to categorize. We will get into that further. But, let's mention some that will have continuing attention with a little commentary.

Needless to say, for the 300th, there was a lot of effort put into genealogical research and publication. As said, the 200th was overshadowed by concerns for getting the U.S. going properly. The 400th will be about history and bringing information into a better mode for continued work down the pike, which implies 100 years plus (we will cover this under technology, in contexts such as discussing content versus configuration).
We are using 1624 as our date while being cognizant of the overwintering party. But, we have other commemorations that will ensue, such as the arrival of Roger Conant (1625) and the movement to Naumkeag/Salem (1626) with parallel efforts applied to the other locations where collateral families were involved early on (say, Ipswich). 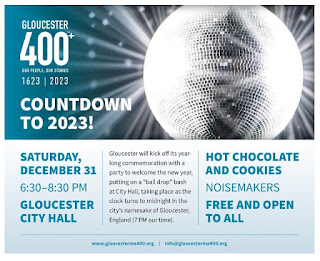 Theirs is the first commemoration in Essex County, MA. Which is our original focus, like this: Cape Ann (Glouceser), Salem, Essex County, Massachusetts, New England.