In the latest issue of Gardner's Beacon, which was Vol. XI, No. 1, we mentioned one of our continuing subjects: U. S. Interior. In part, the subject of the U. S. interiors deals with history, however we add in the family aspect with the same intent as groups focused upon historical and genealogical topics (say, the NEHGS). We have called the period of over hundred years in which the interior expanded to be the Frontier Century.

While browsing today, we ran across a map that looked interesting which is given below. However, let's take a moment for reflection. The map was in a collection of other images related to why the U. S. has been successful, in the world, which is a debatable subject. There was no attribution, so we used the facilities of Google's image search to find the source for the map. It showed several similar maps, however PInterest had the map and pointed to where it got the map. So, that was nice to see.

The site is run for teachers. Here is the map which provides a timeline for acquisition as well as some indication of the geography. We have had several posts on this subject which are list below (such as, All that Louisiana brought, which is first on the list). 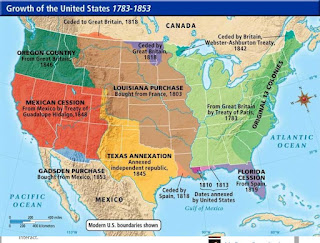 The map also was used at a Quiz site. Doing this exercise made us aware of a Wikipedia page that looks at the "Territorial evolution of the United States" and provides an animated map. This reminds us of the Virginia map showing its extent over the first few decades.
List of posts dealing with the western expansion (as we call it). Part of the discussion and work will be taken by concerns for our relationships with the American Indian.
In conclusion, New England influence by family or other parties is our interest. We can see a good reminder with respect to the founding of Lawrence, KS and the University of Kansas.

To set the stage, let's do a quote. This is from Chapter 1 in which Cordley quotes from Whittier's poem, "Song of the Kansas Emigrant:"

We cross the prairie as of old
The fathers crossed the sea,
To make the West, as they the East,
The homestead of the free.

So, as the early ones "crossed the sea" 400 years ago, we saw the later ones crossing the prairie, the river, the mountains, and the valleys 200 years ago.
Nowadays? Flyover country or by car (1300 miles from San Antonio TX to San Diego CA, by Interstate, 22 hours).
BTW, one other focus is technology, especially computationally framed reality. So, now we are going to be sailing the seas of the cyber and virtual?