TL;DR -- Considering technological issues related to computer systems some of which are exhibiting, supposedly, behavior that might be considered intelligent. Some of these systems handle language interchange with humans, somewhat. On the other hand, we have the example of educated humans who grasp lots of material with an understanding that is apparent in effective action. Versus, the more focused modes that we see with computer systems. The debate continues. In the meantime, we can see slow progress with respect to computer-based information. A long-time example is provided.

We have had several posts on technology over the years in a general sense. We have also taken up the them of History, Culture, Technology. And, we have several times remarked about content versus configuration in terms of knowledge management. The computer has really changed the landscape.

We started in 2010 using Microsoft's Office Live. It was two years later that they switched to Office 360 and pruned out lots of small business systems that had developed. We are to where we want to incorporate an ecommerce flavor, of sorts, but our focus is research. WikiTree is sufficient to support our genealogical needs. How to handle the rest of the requirements is a recurring them? Associated with this is the issue of what are the requirements.

Since the introduction of the smart phone 14 years ago, we have watched the evolution. 'apps' were one major enhancement (for better or for worse is to be discussed) with wide-spread ramifications. We just got our first smart phone a couple of weeks ago which will help hone our research. That is, the platforms for interface are several, but we have three as a focus, at the moment: mobile, tablet/laptop, desktop. Other platforms? The whole of the gaming theme, including the 'meta' dreams of Facebook. 5G and IOT as frameworks for the future are a big deal. At the upper end, we have the huge systems doing massive computing. We have to mention the cloud which is not to be without huge farms of computers dealing with distributed systems in disparate areas and across a never-ending landscape of information.

Got the drift, yet? I may have mentioned this once, but the Gairdner Foundation was an inspiration when first seen years ago. It was started in Canada by a Gairdner gent from Scotland. Their focus is medical research for which they support work and offer prizes for results. This is a huge domain.

Computing? It's larger, for several reasons. For one thing, it's supportive of everything. Like IEEE.org says, their members have been involved intimately with all advances in technology of the past century. Then there are all of the issues related to 'smarts' with respect to computing. I already mentioned the 'smart' phone. Another topic would be AI and its association with knowledge and autonomy of artifacts. Of note are the discussions currently looking at the various subjects. Lines are being cast.

Our focus is the U.S., principally, with New England a key topic. A large part of our history has been technology as it evolved in our timeframe. The past few decades saw an acceleration where American ingenuity influenced the world. Of late, China has made inroads which will be discussed. For now, this image is from the Communications of the ACM, Nov 2021. 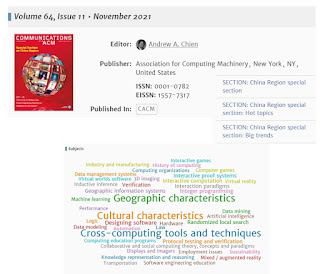 There are several articles to discuss, such as this one reviewing NLP with respect to the historical work plus enhancements that accrue to applying modern techniques: Knowledgeable Machine Learning for Natural Language Processing.

In the larger picture which deals with complexity and thereby limits to computing, technical perspectives article provides and overview and arguments for MIP* = RE. This has direct implications related to the need for management of expectations.

One might argue that AI AIn't. In the general way of progress, hype has been let loose of its restrictions. Mind you, much misinformation is out there. Where does one go to find any type of truth? Well, that is one thing that we can help with. Our little portal is meant as a means to define, discuss, and determine matters that go to the core, even with regard to our very essence as humans.

So, let's put here a little bit of text from a discussion. This from a post by Prof. John Baez with regard to thermodynamics as seen from an introductory framework (Composited thermodynamics).

I'm sure there's much more to be done. But I feel happy to see modern math being put to good use: making the foundations of thermodynamics more precise. Once Vladimir Arnol'd wrote:

I'm not sure our work will help with that---and indeed, it's possible that once the mathematicians finally understand thermodynamics, physicists won't understand what the mathematicians are talking about! But at least we're clearly seeing some more of the mathematical structures that are hinted at, but not fully spelled out, in such an elementary course.

How this relates to the above is that thermodynamics has been studied for a few centuries now. Count Rumford was an early researcher. AI? Modern to its core. Most classical views that might relate are not consider. Or, have not been for several reasons. But, the computer and changes to cognition can be observed. We are too new to this game to know as much as we are assuming.

Be that as it may, finally we can get to the gist of the post. Favorite site? It has been mentioned several times in posts (Culture, History, Technology). Prof. Baez started blogging in the 1990s using the blogging mode in vogue at the time which was the minimal type of framework. He kept at it until about ten years ago. Reminder, this blog dealt with advanced mathematics of the highest order with embedded images and many equations written out in a textual format. The message got conveyed.

When he transitioned, he left his old blog that was full of content which is one of our themes. And, he went to WordPress (Azimuth) which we have been using, somewhat. Seeing him work with both the old and the new is encouraging.

Right now, we have two sites. We will transition to using the new (https://TGSoc.org) while we work issues with regard to re-configuring and adding in new facilities, such as ecommerce functions.