TL;DR -- While looking at Heads of Harvard, we ran across a lecture by a Dean that included a piece of a poem. So, we went and looked for this. Found it in the Harvard Graduate's Magazine. Also, we are tracing down the influence of New England on the west, that is west of the Mississippi River. And, as we find New England references, we like to follow them to know more of the people and their families. This is one current focus which we'll follow as long as it bears fruit. Then, we saw that a contribution has been made by the head of Meta to Harvard to study intelligence, natural and artificial. Sounds to be great news. We'll watch how this unfolds.

We have been looking at Harvard's influence on the U.S., primarily by getting to know the Heads of Harvard over the 400 years. The sampling (see History of Harvard) that we have done so far is interesting. The sample has been motivated by considering current affairs at different times.

Today, we thought to revisit the Western rivers that had our attention, for a while. Why? There is a TV show titled 1883. Also, it has to do with Yellowstone. So, that got our interest, though we have paid more attention, til now, on the earlier times (pre Civil War). One thing we looked at was Harvard names out west. There is a 14k footer with the name in Colorado. Many of Harvard have been in the area, like Henry Keyes, with other students, who did some mapping in the area in 1899 and wrote a journal.

While searching further, we found this poem given at a talk and looked to see where that came from. 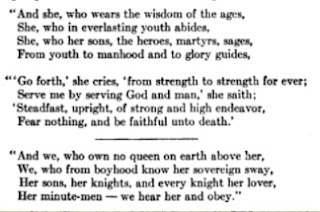 It is a good representation of motivations that might accrue from being of Harvard. That is, the talk was titled "The Personal Character of Harvard" by LeBaron Russell Briggs (WikiTree: Briggs-5684). It appeared in The Harvard Graduate's Magazine in 1920.
Briggs held several positions of leadership at Harvard, including Dean of the Faculty of Arts and Sciences and Dean of Men.
So, to the poem: 'Go forth, she cries, ... serve me by serving God and man.' Ah, the secular Harvard. Wait, this was a while ago. Where did it come from? Well, it can be found in The Harvard Graduate's Magazine, Vol. XII, September, 1903 - No. 45. It is titled: Mater Fortissima and is a Phi Beta Kappa Poem of June 25, 1903. By? L.B.R. Briggs, '75. So, the man quoteth himself.

One of our motives is to have Harvard included through time as we look at generations. For instance, the Fifth Gen was the core of the U.S. Revolution. We will continue along this vein after stopping to look at what we have accumulated so far.

At the same time, we are looking at the family history of those we consider. We have already followed some links related to collateral families. There is no end to this work which would not have been capable of accomplishment before the internet came on the scene.

On another note, we have expressed our intent to focus on technology as we consider the 400 years of New England influence. And, that would include Harvard's work, as well.

BTW, a pointer to the Officers and Deans page.

The Crimson has this article, recently: Chan Zuckerberg Initiative Pledges $500 Million for AI Institute at Harvard. This is an institute-wide initiative with the purpose to study natural and artificial intelligence.

Hence, the inclusion of the poem relates to the several themes of this post.