TL;DR -- The Economist reviewed a book that reported on research using Post Offices as a proxy for studying population and movement. The demo and its code for the project is at GitHub with Harvard providing the data repository. This is an example of a growing trend related to reproducibility through time and across region. We look at maps that show the early start and the frontier century. We will revisit the theme as we dive further into research which will also look at nautical world as well as influences other than New England.

We have followed New England's influence starting with the nautical experiences and then getting into the frontier times in the west. St. Louis will be a center point for the earlier part of the westward movement since it was involved in carving up (see Bent post on surveyor father and his trapper son) the huge pieces that were obtained via the Louisiana Purchase and later acquisitions. But, there was movement inward from the left coast, too, as well as from the south (giving us Texas, the great State) and its spheres.

So, our research focus will include, then, four centers with Salem in the east (yes, we see Winthrop as a later arrival), St. Louis in the center, San Francisco out on the left coast, and somewhere in TX as a southern point. Perhaps, San Antonio. Too, rather than the esteemed heights of the historian (academic) as the focus, we are following families, especially in regard to the middle not being flyover country.

The below is motivated by an article in The Economist (How the West was won). So, there is an aura (per usual, Brits, what else?) of judgment that seemed to waft from what the verbiage expressed. Okay, we like the mag, for depth of content and humor. Also, they are talking of a book, same title as the post. Here are some links related to the book and author.

Now, with respect to GitHub, we have referenced this several times as it pertains to the work of Gardner Research and to the notions of the digital realm (for which we propose truth engineering as a necessity). Our portal (https://TGSOC.org) is a start on the long trek required. Expect the theme to continue.
Before going further, we want to remind everyone of the Age of Colonialism. The U.S. did not run around the world competing with Europe. Rather, we had our own internal dynamics. The look at the carving of part of the hemisphere will cover that. The nautical? Ah, business on and enabled by the sea. Boston got its Brahmins. The left coast and Texas? We'll punt that to later posts.
We did snap of Professor Blevin's graphic at dates that are pertinent to our work. We are diving, now, into the situation at the beginning of the wild west, and a little before as we recognize New France and New Spain. We want to go to about the 1850s where the middle was being used as a cultural battleground long before the Civil War. But, the graphic also includes the beginning (1792) and a couple of snaps from the 20th century.
This page gives details about the analysis using Post Offices. The image below was created from snaps from that page. Note: the application is hosted at GitHub. 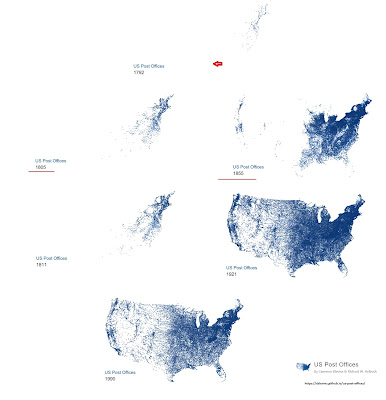 This is only an introductory look. At the top is 1792 when the new country was getting its legs. There is a little dot out west marked by a red arrow (New Orleans? Too early; looks more like TX and too early; so stray dot?). The next row is our current interest which involves the early surveying times (1805) and the time of regular traffic via the trails (1855). The next row is our Frontier Century snap (1811-1921). Why 1811-1921? The snap was after a stop. The years are close enough for what we are doing now. After all, 1811 is one year before 1812's turmoil. 1921 is after both WWI and the Spanish Flu. Lots happened to families between that time.
We will get more fine-grained later. Lots to discuss there. In the last row is 1990 which is interesting when compared to the 1921 snap. As one watches the graphic, dark regions become light as POs close for any number of reasons. The thing is that the highways become visible.
Aside, Jedediah Strong Smith gets little respect for mapping out the CA Interstates ;>). He got us aware of the long reach of New England. But, too, he was around a whole lot of other folk that we have looked at and will continue to study.
Remarks: Modified: 06/17/2021