TL;DR -- Technology allows lots of ways to present data. Something of interest is the age of humans on the planet where the continents are shown with population count through time. Of course, the flow is out of Africa to the mid-east and east and back to Europe and the Brit isles. Too, there is the flow into North American from the west. Then, starting with Year One, we can look at population, mainly in North  America and Europe. And, we show this for the years of 1750, 1800, 1850, 1900 and 2000 which cover the main divisions in time starting just before  Revolution and at the end of the 20th century.

Somehow, a page came up while browsing that has a video (7 billion around the world in 5 minutes) that shows the human population from early times as it wandered the world using a global map. Then, the presentation goes back and starts from year 1 (CE, AD) in increments of 100 years. We took snaps so that we can show how the U.S. compares. 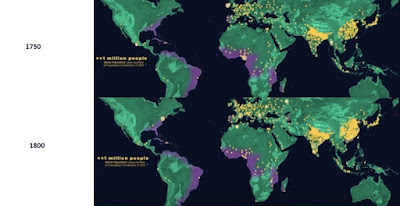 This first image shows maps from 1750 and 1800. The yellow dots represent one million people. Notice that the U.S. only has two dots: Southern New England (would be VA/NC/SC/GA) and the left coast (SoCal). Even coming forward 100 years, we only have one additional dot. And, it's huge. New York City (and surrounds). Yes. That is our place for which untold tales are pending being told.

Before going further, look at the populated regions. Even Europe is not hugely dense. We have India and China, basically, representing the human populace. Yet, we know from the specifics as told by history, that lots was going on in Europe and in what became the U.S. 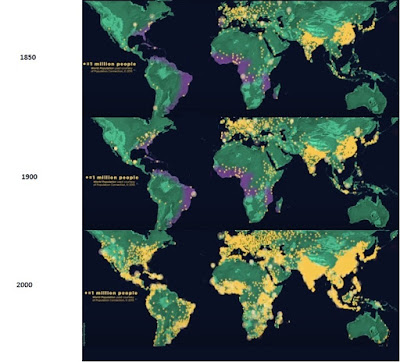 By 1850, there are more and balanced dots in the northeast as we have New York and surrounds coming into influence. However, now, there is a huge spot in the midwest. Chicago might come to mind, but St. Louis would be a factor, too, as it served as the Gateway to the west. By 1900, we see more interior dots with Chicago, again, the center of activity. On the west coast, Mexico outweighs SoCal in terms of population.

Finally, coming forward to 2000, the spread is almost complete. Except, large areas are not populated for several reasons that can be rated from an element of difficulty to near impossibility. For instance, one can pinpoint Denver and one area with population in a mountainous area.