TL;DR -- We have looked at things western from St. Louis on out. Now, we need to see how people got to St. Louis. One method was the Ohio River. It's time to look at that waterway whose basis goes from NY to IL on the north and from VA to western KY on the south. The Ohio River carries water from SC, GA, AL, MS, and KY to the Mississippi.
--
We seemed to have overlooked the Ohio River. So, we can look at it more closely as this river did more than help people run down the water to the Mississippi River. That is, St. Louis was a key point on the trails west where people transitioned from flowing down the waters of the Ohio to where they labored up the Missouri.

Earlier, we have had several posts about waterways as helpers and hinderers. If one was on one, and it was navigable without much difficulty, then progress was faster than traveling on land. However, lots could go wrong. Lewis & Clark ran into shallow water early on. Notice that it took hours to unload their boat, move it manually, and reload (that is, after carrying the load downstream). Fortunately, a little further down the river, the depth improved. And, they got out west to the coast and back. We will be getting back to events along the Missouri and points west. 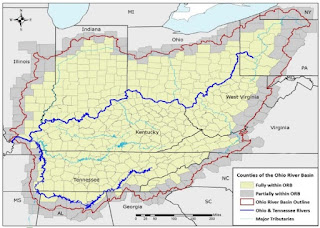 When one considers the whole of the drainage basin for the Ohio River, one finds that it is quite extensive in terms of coverage of the U.S., the flow, commerce along the river, and a lot more.
The image on the left comes from a paper that looked at water use (Ohio River Valley Water Sanitation Commission, see orsanco[.]org). The redline shows the boundary of the basin. If we follow this boundary from the top right, it goes southwest from NY to NC. Here it goes through PA but gets water from MD, VA and WV. Then, it goes west through the south (SC, GA, AL, and MS) since the Tennessee River empties into the Ohio. As well, the Cumberland River of KY and TN ends at the Ohio.

The Ohio meets the Mississippi coming down from St. Louis at the left middle of the map. So, following the redline back, the basic includes IL, IN, OH and back to PA. The size of this basin is 189.4K square miles. Its counterpart to the west is the Missouri basin which we will be getting back to. However, we also will look further at the Wisconsin River (via the Fox River) basin and the Arkansas River basin (Jedediah Strong Smith was killed in this area) and a few more.
The image on the right shows the basins for the contiguous States. The numbering starts with the Columbia River basin plus those of OR, then those that flow to the Pacific (and others) in CA. The 3rd deals with interior flows, such as that for the Great Salt Lake. The 4th and 5th are for the Colorado River basin.  The 6th is for the Rio Grande. The 10th, the largest, is for the Missouri (see below). The 8th is for the Arkansas.
Earlier, we took a brief look at an area where the 1st, 3rd, 5th, 8th, and 10th all have water courses with fairly close origins that split out into flows into these different areas. In the below map showing the basin for the Missouri River, we are talking the upper left part of the map. Back to the Ohio, given that we can trace families along these courses to various parts of the country, we will also include activity that occurred early in their endeavor. Going back to a look at establishing KS as a Free State (post was in 2016), the group that left the Boston area went to New York and got a steamer to Chicago via the Great Lakes. Then, they took a coach across Illinois and Missouri to the Kansas City area. After that, it was by foot or horseback. Now, this was in the 1850s. Of late, we have been looking at matters up to three decades earlier.
However, for the Lawrence group, the travel would have been much faster.
In terms of the Ohio River, it was shown to be more efficient to move goods down from IN and IL on the Mississippi River to New Orleans and then by ship to New England than trying to push things back up stream.
Remarks: Modified: 07/01/2021