TL;DR - The 400th can be split into the 250th plus others on both sides of that divide. There are many categorizations for analysis that do not get much attention in prior times. For one reason, we did not have the data nor the technology. That has changed this time around. Essentially, Gardner Research is setting itself up to follow the series of 400ths that we will be seeing in New England as each of the towns takes a pause to look back at their history. At the same time, we can look from the 250th onward with respect to these families.

The overarching theme of 400 years of history is and will be our focus. Extensions? Well, there are various areas that we can learn more about. But, our first area was Massachusetts. All matters considered were from that focus with Essex County as core for several reasons. And, unless some conceptual modification comes into play, extending the boundaries of our views will be from the area of New England including both the north and the south.

One impact of that will be always looking at how the long reach of New England came into play in any situation across the country. Actually, given our use of both north and south, we pretty much cover the basis. New England south had its 400th in 2007 with Elizabeth II visiting. At the same time, Maine was on the agenda, albeit without much fanfare. They endured much better up there; the decision to not continue had to do with a death in the family of the leader that required him returning to England.

There are several points in time that could attract our attention, so as to make things seem disjoint. However we will use an event whose 250th is coming up. Namely, nodding to SAR/DAR, we will use the fifth generation's involvement with the Revolution where aspects before and after will be part of additional research. Partly, the necessity for this comes from our personal orientation with respect to history. That is, dealing with families can throw light back into situations and allow us to relook at what might have been thrown out through the desiccation process of history that removes the juices of truth.

Some have done this type of thing. For instance, the 300th lookback from 100 years ago had lots of activity of this nature. These were local in scope, due to many reasons, such as technology. Too, the flu pandemic had influence. But, we, as a whole, are also more knowledgeable now than ever, with communication schemes that have lots more potential than we have seen come to fore. Technology, then, will be a part of our focus, too.

Now, this post looks at two different times. Both are post the Revolution and are separated by a couple of hundred years. Why these? We can show that the parties have ties back before the turmoil. That will be part of the 'long reach of New England' study. Too, though, they are only examples that can be quickly done. We have lots and lots of other types of categorizing to do and which make sense.

Now, the first time extends our look at the early times of the U. S., especially those things dealing with the west which was where the three major groups (New England, New France, and New Spain) interacted. The post titled Frontier century gives a little bit of a background. Here we point to a few incidents and people during the time when the northern borders were fluid so that restrictions were loose. And, we need to look at New France's contribution which was earlier; the American spread across the wide expanse was not until after the conflicts with Great Britain were settled.

Reminder: this is work being done by Gardner Research. Too, we will address all types of media. We did not see the movie nor read the book (yet), but the film Revenant dealt with the area of MT and SD and surrounds in the 1820s. People there were from New England (north and south) and New France. It is that latter that caught our attention with respect to this posts. Who were the people? Why were they there? And more. Too, though, we argue that the 'frontier' experience is not getting proper attention by those of the east coast. So, let's let descendants of early arrivers here tell their tale, so to speak. At the same time, we'll do the proper generalizations to get the knowledge respected.

The second time is more recent and deals with the current landscape where a blue/red bifurcation is noticeable. From our perspective, we see two sides of a coin. So, let's get the 'coin' defined better to start to abate some of the conflict.  Too, leadership in the world that is wanting and needs attention will be more amenable to analytics in a sense that the U.S. will help define.

Small steps being proposed? Yes. But, things are screwed up. Lessons to be learned have not be grasped. The 400 years as pertinent? Well, we have not seen a proper look at the preceding 150 years. Yet, there are a slew of families with that whole bit of years as part of their legacy.

So, to the times.

A. We have looked at several periods where the early players were the trappers and where the eastern link was via St. Louis (MO). New France was in the MO area concurrently with Thomas' later years in the 1670s and further west. We have seen much later activity, such as Judge Thompson's trek, which was mid-1800. But, we really need to back up. For now, here are links to material with some comment. Plus, we can say that seeing a painting by Paul Kane got the query started that resulted in this post.

Alexander Mackenzie (1764 - 1820) - born and died in Scotland. He was on this continent several times. He came into New York with his father prior to the Revolution. However, his father had already served in the Brit military so was a Loyalist. He shipped Alexander north where the young guy got bit by the fur fever (what else was there to do?). Jumping ahead, his treks went north (to the Artic Ocean) and west (almost the Pacific where he had wanted to go before wandering north). Being persistent he was and is known to have been the first European to cross to the Pacific (close enough to see) from the east. This was 1793. The U.S. was twixt the Revolution and the War of 1812.

David Thompson (1770  1857) - born in England; his entry was into Manitoba. But, he too headed west. David mapped the headwaters of the Mississippi which goes south. In the same area, many rivers go toward the Lakes. Later, David navigated the entire length of the Columbia River (see image) which is what got our interest as most of the river is in the U.S. This party established a fort in what is now the State of WA.

Simon McGillivray, Jr () - was one of the managers of the Fort near Walla Walla (WA), serving in this capacity in 1831-1832. This was an early time when the Hudson Bay Company was still prominent in the area. Until the resolution of the boundaries in the 1840s, there were parties from both New England (and the U.S.) and Canada operating. A relation of his was Duncan McGillivray.

Paul Kane (1810 - 1871) - he came into Canada from Ireland but did extensive travel here and abroad. Paul crossed the Rockies a few times. He did a lot of painting (sketching on site and doing the painting later). His painting of a buffalo hunt in SD which was done in 1846 got our attention for several reasons. 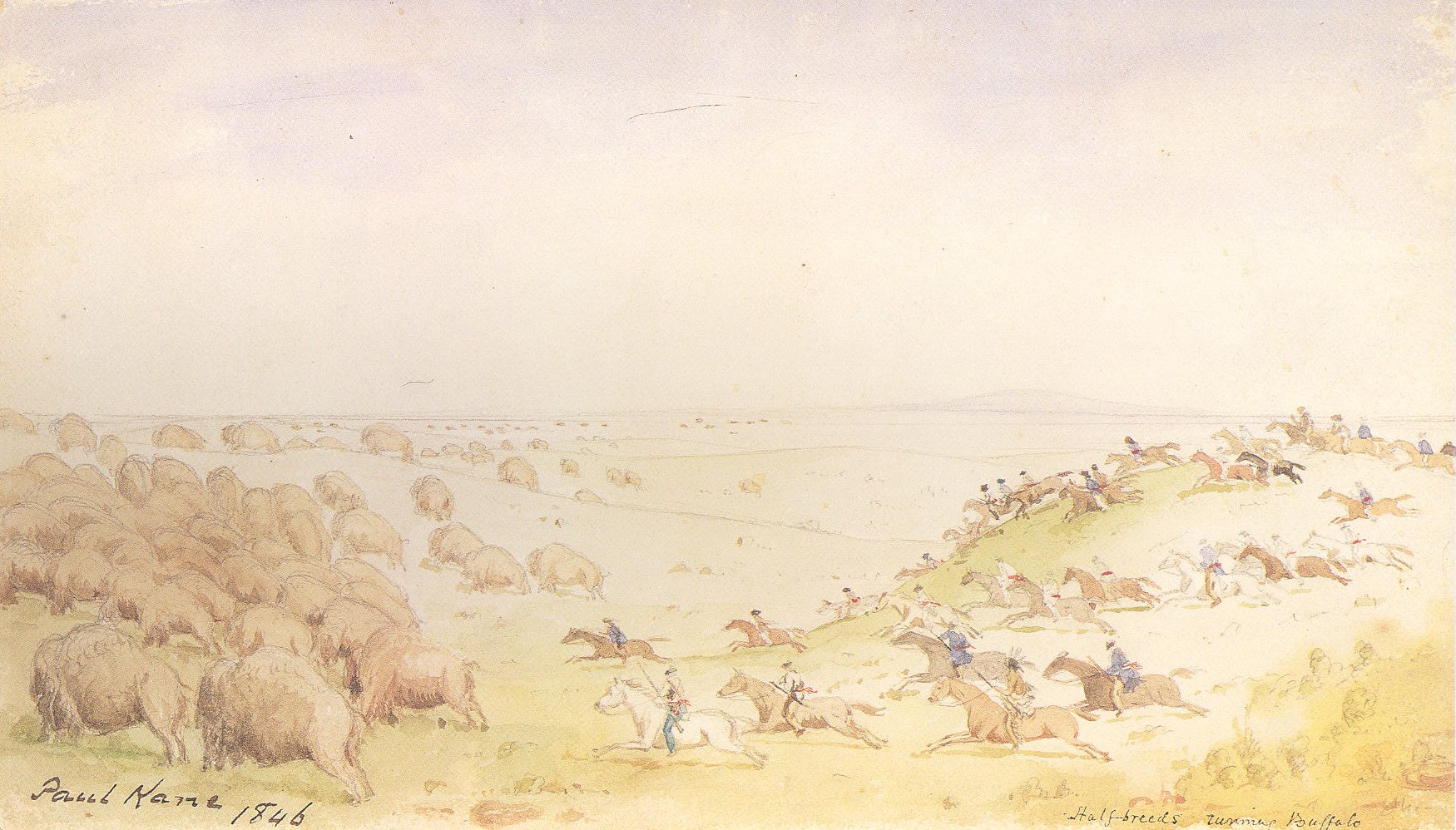 B. Now, jumping ahead to the 20th century, we have several families that we can focus on in this regard. For now, this is a short list which would include William Coffin Coleman whose ancestry we are studying as it looks to be New England in general with particularities related to Essex Co, MA.  William was in the north and the south before getting into the central plains.

A recent discussion got us thinking of the various threads that we can follow which would be families in the central areas from the beginning. Many of these have parts of their family that came in along the timeline, to now. We want to see that whole balance.

So, these two gents are such where one side of their family is old New England while the other side is a recent import. This was a common occurrence. If we look at SAR/DAR, many patriots (and loyalists) were of one or two generations from the entry of their family. On the other hand, old New England (north and south) saw the fifth generation bear the brunt of the conflict with the fourth generation involved as leaders of various sorts. Too, though, some early members of the sixth generation were of sufficient age to contribute.

This below pairing is of interest due to times that we are in. Too, one of the gents is of a family that stayed on the east coast. The ancestors of the other came to the wild west. And, for each, we have a much larger bucket of families to throw in. After all, when one takes the 400 years and considers what might be a generation, we can have 1000s of parental nodes, many of which can be known (see Numbers, again).

John F. Kerry (1943 - ) - John is a descendant of Thomas Gardner, via son, George and is a representative of Winthrop-Dudley clan that has excelled in public service for the U. S. The ancestors of John's father, Richard John Kerry, were newbies. It was through his mother's (Rosemary Isabella Forbes') mother that John got his New England pedigree (WikiTree profile for Rosemary). John is still alive, however he is a public figure with documented histories available on the web.

A quick glance at these two gentlemen and their families would bring out lots of differences some of which seem to generate a permanent bifurcation. That is one problem that Gardner Research is helping to work on. Similarities abound, of course. And, many of the seeming differences can be seen as 'spectral' in scope which points to one of our interests: the 400-year focus across families can now cover much more than was possible before. And, it's fortuitous that the capability of technology might just be ready for the work that is needed.