TL;DR -- We have the 400th events in mind, however we always we looking, at the same time, at the 250th (fifth generation) and 200th (later generations). Our first example is a photo of descendants of signers of the Declaration of Independence mimicking a pose from the earlier time by Trumbull. We see this as something to focus on with respect to the new beginnings. The other examples relate to the expansion after Jefferson's deal, albeit they are separated by a couple of generations. Carving of the land went on for a long time.

As we look across time and space with regard to the U.S., there can be many categories that come into play with respect to people, events, and a lot more. Earlier, we had a post titled "Two different times" which looked across the 200 years from the carving of the land to the 20th century. This post is along the same line but a little different theme.

We have two major themes here. One relates to descendants of some of those who were involved with the founding of the U.S. There are many more people. To wit? The volumes of Mass Sailors and Soldiers. In particular, this is about the Philly work that was done. Then, we look at the time of the carving of the land and of conflict with the Native Americans.

As a reminder, we will use WikiTree due to its restriction to one profile per person. That forces people to share information in a sourced manner. Several projects at WT are exemplary in this regard.

1. We saw this on FB and liked one of the photos which comes courtesy of the NYT. The post was: Descendants of the U.S. Founding Fathers Recreate Iconic Painting 241 Years Later. The top part is Trumbull's 1819 painting. The bottom is of descendants who could be gathered to recreated the scene. 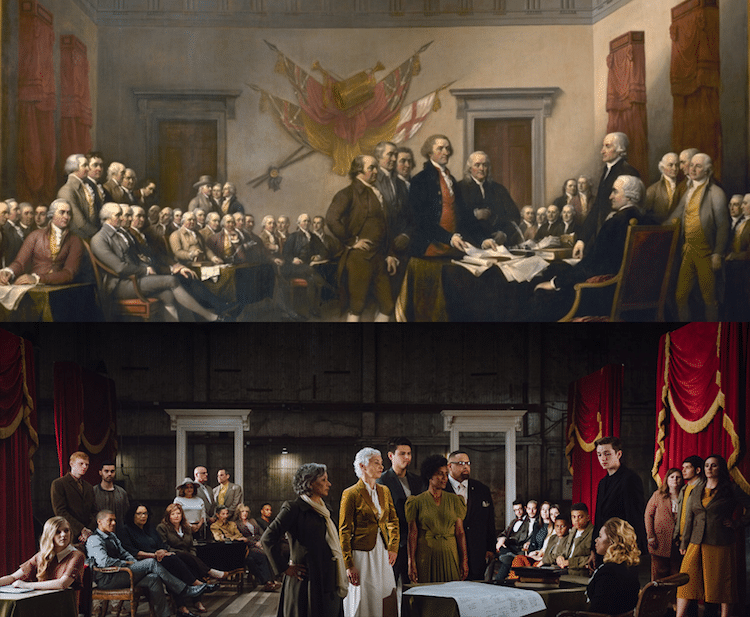 This type of post will be a continuing theme. We have not search out WikiTree information, yet. However, this ought to be a project similar to the one that is trying to identify patriots from the Revolution. We are considering one for those who were awarded a Medal of Honor. Lots of work to be done.

2. Just as the last bullet came via FB, this one was from a stream which we will identify, at some point. This case is early, meaning way before the Civil War. It involves a child in Texas who was kidnapped and later rescued: Cynthia Ann Parker (WikiTree). There are many examples of this occurring.

3.  Somehow, we got to a page from the True West magazine. We saw Gardner and stopped to look. Alexander's work was Civil War and after. We used one of his photos in our look at the Frontier Century. This page was dealt with photos taken in Arizona of the local tribes. Olive Oatman's photo caught our attention. Her WikiTree Profile shows her New England and earlier pedigrees.