TL;DR - We had our head in New England for a long time. Much to learn. Then, we lifted our sights to other areas. There were many incursions over time, from the view of the American Indian population. How they mapped back to the Old World differed but in interesting ways. For New Spain, we don't usually think of the Pacific Northwest. Anywhere is Spain is like this? Of note, is while the quibbling was being done in the East (the Revolution), a Loyalist was making his way west out of New France. Took several trips, including a sojourn in London. But, he got coast to coast in the real way, on foot. Listen up, those who see the heart of America as flyover country.

We know that this continent was populated prior to the incursion by Europeans. Our focus, from the beginning, has been efforts related to the establishment and development of New England. Of late, we decided to broaden our scope for the future which got us looking at the other colonial experiences, such as New Spain and New France. There were other countries involved early on which we will get to. The motivation, though, is to have a more full picture across time and space. 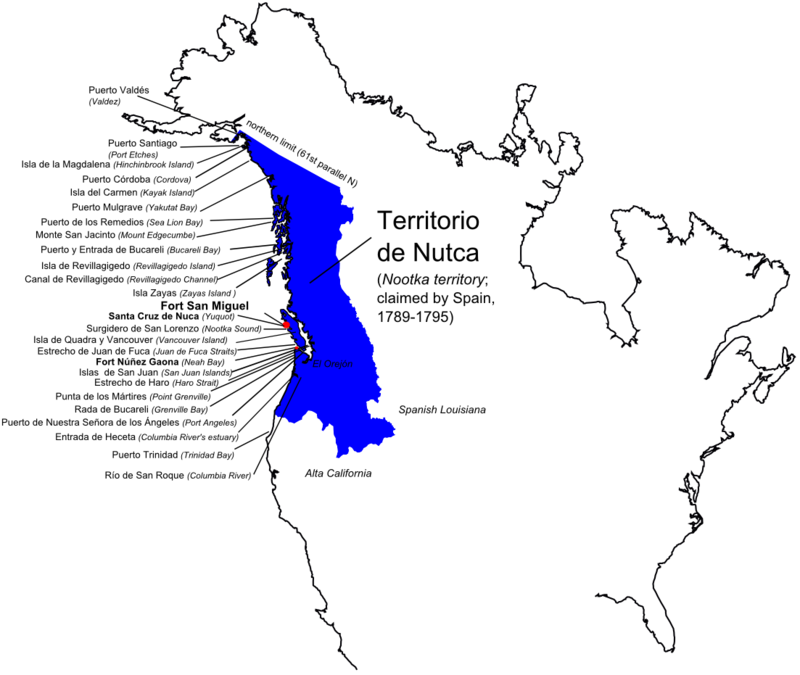 We are taking New Spain first, since it is less known. England and France have a history going way back: Edward III had a claim to the French throne. William I invaded England from France. And, in the New World, France diddled with the English from the beginning. As well, the Magna Carta times involved activity by King John and his family with respect to property rights in France.

We have thought of New Spain, mostly, with respect to the Louisiana Purchase which dealt with the middle region of the country. But, there was also the southwest and the west coast that we need to consider. In this post, we will take a look at the Pacific Northwest. Using Wikipedia, we see the history view starting with the indigenous peoples. Then, there is some coverage of European exploration starting with Drake for the English. New Spain paid more attention to area.

But, it is nice that the Wikipedia's page looks at the first crossover from the east. This was done by Alexander Mackenzie and was fairly late, considering the early activity related to the fur trade. Mackenzie was Scottish and returned there after his trek. He came over before the Revolution and was sent north to Montreal as his family were a loyalist. We have looked at one Gardner loyalist family.

As we have seen, New France ventured much further west than New England. They had water that they would travel on going west. It was from that region that Joliet and Marquette ventured down to what is now Arkansas. Later, it was from the western end of Lake Superior that MacKensie went west to Alberta. The first excursion from there to find the Pacific got to the Artic Ocean. That was in 1789. After going back to Great Britain in 1791 and returning the next year, to attempt to get to the Pacific. Ignoring some details, for now, he ended up in what is now British Columbia and can be known to have made the first coast to coast trip across the interior (that is, north of Mexico - and we might add, New Mexico - not the State, but the whole southern region).

Next up, we need to look at southern New Spain as there was regular traffic from Florida all the way to California, by boat and foot. We will do a few of these posts, using old maps: Maps of Early America 1400-1800.

03/18/2021 -- For starters, let's look at two routes: San Antonio TX to San Diego CA and the Butterfly-Overland route that took over three weeks to go from San Francisco CA to St Louis MO. We can look at these both ways: back to the American Indian trails; the modern highway system as we did with Jedediah Strong Smith.