TL;DR -- ME has been in sight since the beginning. NH only has had passing reference as we studied Cape Ann in relation to 400 years. They have 2023 for their commemoration, as does Gloucester. We look at a few of the posts over the years that mentioned our scope. In our future research, we will balance the view across the local territory and further, in this context: the long reach of New England.

We have had a 400th focus for a while as we watched other celebrations (Plymouth - 2020, Weymouth - 2022). Gloucester comes up in a few days. Our start was with a focus on Cape Ann and Essex County.

Then we extended our view to MA and New England. Incidentally, ME was involved due to its association with MA. After looking at the long reach of New England in the interior and the west of the U.S. and around the world, we now have a U.S. focus through the 400 years where we consider details through time of the other colonies (like New Spain) as well as the events related to populating the interior (Frontier century).

Recently, while looking at the Northwest (as seen in the time of the Revolution), we saw Rhode Island being represented out west, in the form of a Governor of the Territory of Michigan. Having looked at the family involved and tying things back to Massachusetts, we thought to fill in the gap by looking at a family that had long been in RI (see H.P. Lovecraft). We had mentioned that we needed to bring in the surrounding States, such as CT (a little later), NH (which we had already touched upon), ME (which we have covered many times) and VT (already noted in looking at western movement). We will get these posts better categorized and related as we work the 400s going forward. RI and CT do not come up on the 400th list yet, that we know of. We should have looked north, again.

Today, we saw (on FB) that the northern neighbor whom we associate with Rev. Bachiler is on the 2023 list. That was good to find out. We will spend more time researching the Rev. and his cohorts, but he was mentioned recently in this post (see Two Houses) which was motivated by research on New Hampshire families where it was noted the Gilman family was of interest with regard to the Revolution (both sides, plus the Society of Cincinnati). Nathaniel Ladd was one of the builders. We also had looked at the Dudley family who hung out there.

Rev. Hubbard, friend of the family, weighed in on the controversy of when did NH start. John B. Sanborn (several posts) was born in NH. Sam Webber, Head of Harvard, was born in Essex Co, MA, but his family moved up north. Lots of Ann's folks did the same.

Hence, in a few days, we'll have another commemoration to add to the list. As well, we need to find a time line for NH similar to the one for MA. 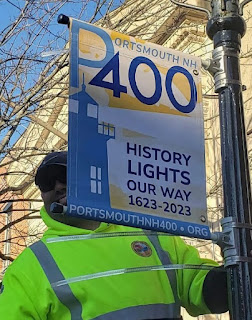 This was a great reminder as it expands the scope at a good time, that is, when Essex County starts its long-awaited commemorations.