TL;DR -- Looking at the Northwest Territory, which is far east of the Northwest Territories of Canada, we saw questions arise that we can pursue further. For instance, tracing a family some of whose members went west we got back to Connecticut and then Philadelphia. Some of the tracking issues involve changes in governmental overview over the 150 years to the Revolution and the 250 years after. Technology has offered the means to tie information together, across time and space, in interesting ways. An example is Family Search which we have used from the beginning.

We have used Family Search from the beginning our endeavors, which led to the Thomas Gardner Society, Inc., such that it's now our first line of research after WikiTree. Of late, we have been researching families that moved inward starting with the creation of the new nation. But, to get the proper perspective, we found that we need to step back a decade or two which would include New Spain and New France. But, too, we need New Netherlands and New Sweden. More on that later in the post.

So, we got this feed which showed two guys talking about a video which had been run on a computer. The video showed a ship going from the Dutch country in Europe that ended up at Long Island. Then, there was mention of house built in an area or on a road with the name of Greenwich. Turns out that the builder of the house was the eighth-great of one of the men, an actor. The other? Not associated with ancestry[.]com or NEHGS, such as we saw with WDYTYA or Finding your roots or several others.

No, this scene had been sponsored by Family Search and published on Youtube (it was CEO Steve Rockwood). Here is the video: Matthew Modine Discovers His New York Roots. It is a short bit. We didn't look further but recognized an interesting fact. The actor lives in Greenwich village That's several generations later. Too, that we have associations with people over the water cannot be forgotten.

Now, New York. Just the other day, we were looking at the area of the Dutch settlement. One reason was looking at some activity in the Northwest Territory in the very early 1800s and noticing New England names. You see, both in the 1600s and in the 1700s, New England (north - Plymouth Colony and Cape Ann) expanded several times. Two of interest are when New York came under the Province of New England. Later, the nebulous notion of who owned what settled and we got areas with names and took up the duties of management. We will be looking at all of this more closely.

Here is a related map. 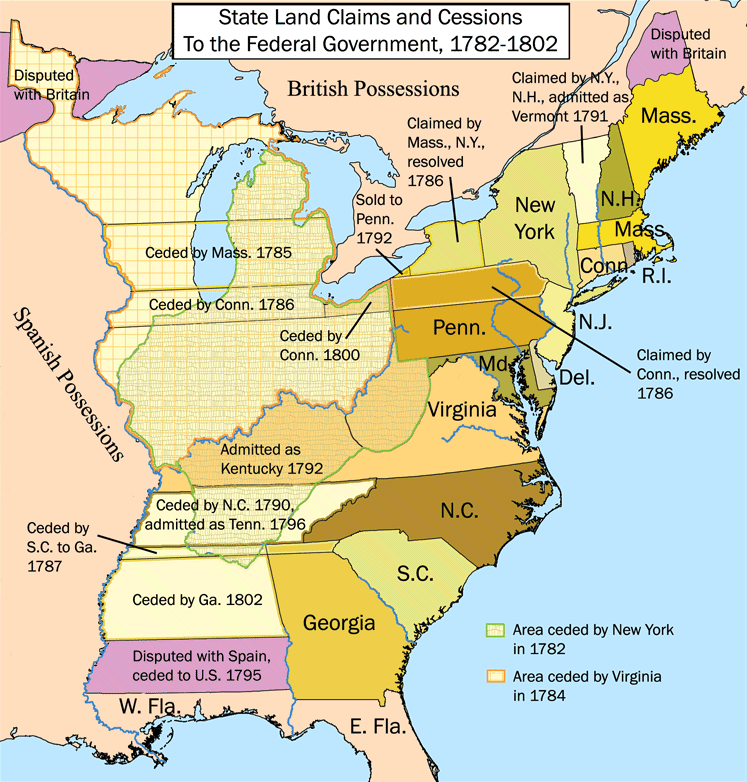 There are several versions of this map, but we used it in a post with respect to the early times that helped hone the carving of land discipline (see Practice for carving). Notice all of the cede activities that went on. States in the east though they owned land out west (see Connecticut Western Reserve). Virginia thought it extended to the Rockies though they had not been that far out.
Now, let's look at one more. This is from the same post and shows the U.S. in its entirety at the time of the Revolution with only New England marked. Lot of the area in red had been under New France and was seriously changed after the French-Indian event. We can see the extent of New Spain. 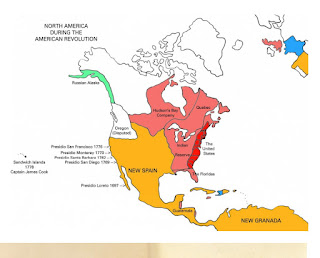 Now, the point is that in the red and orange, later, came families from the east (and overseas), with our focus, for now, being on New England (in its extended mode). After all, Ohio country is in the red and was there at the time of Revolution. As in, settlement had started. Going further west, the Territory of Michigan was in the red abutted by the Territory of Missouri in the orange.
When we get to the orange, we are talking a later time and different technology, yet the same types of families were involved. We used the Bents a couple of years ago (see Trapper, trader, rancher). And, the mode of arrival had been by land (see Western expansion). Some was by sea (see Water and air). One focus has been to track families out of New England, to the West, Southwest and South (recognizing that there had been movement northward, too).
But, looking further at the water ways (other than the multitude of rivers), we know about the Islands, such as Gardiner's. We saw that the southern territories had their island counterpart (see Fifteen colonies). We wondered about travel from Nantucket to Salem, for instance, by water, which would be faster than by land give the right boat and sailor. Too, though, all of those regions near Long Island are accessible by water, including Philadelphia. A ferry from Nantucket to Philadelphia nowadays takes somewhat over seven hours.
----
One interest, as mentioned, came from following a family back from the Northwest Territory, in particular Michigan which was covered in The Massachusetts Magazine) to CT and then PA. In the beginning, administration of an area was run from the east coast. This is one of many examples. As we were doing the work, we made sure to identify Gardners out of Essex County when we could, including Thomas of Salem descendants. So far, we have barely touched upon the topic. But, we see parallels, as we did with the Southern folks (see The almost forgotten). As well, we will watch for existing research, as we see with the Biddle family of Philadelphia. There was a personality of this family mentioned in the news a while back whose ancestry include Plymouth Colony (Mayflower). Too, we see evidence of the family's presence in various ways, such as a house (on Mackinaw Island).

Back to Family Search and its way. We have used WikiTree to expand the graphing portion of our work, such as presenting Dr. Frank's research about his material ancestry. Too, we have been working on expanding the children's progeny out to five generations or so. Besides RootsTech, we will be appreciative of the support that Family Search gives to the study of history and the families involved.
Remarks: Modified: 11/29/2022