TL;DR -- Veteran? We forgot the connection to 'Armistice' that was there in the beginning. We have covered topics related to this theme from the beginning but mainly point to the work of late. Related to the conflicts are the generations involved. A chart looking at the timeline rolls several generations together in a range of birth years. Our view, taking that route, tries to pull out this detail, such as the 5th generation (say, from Cape Ann) bore the brunt of the Revolution while the 4th led, and some of the 6th participated. In any case, we can see the endless nature of this aspect of ourselves.

In the spring, we have started posts related to Memorial Day (2019, 2020, 2021, 2022) which occurs on the last weekend of May, in the U.S. The holiday, early on, had a Civil War focus. Some of our posts were of that category: Jonathan Letterman, Young captain, Secret Six, STL to SFO (using a modern vernacular), and others.

We only have had one with a Veteran's Day theme: Dr. Frank's burial place. Given the memorial focus, we also have had several posts on cemeteries and their issues: Howard Street Burial Ground. Several posts were involved with the theme of "Where is Thomas?" that involved a decade-long quest to understand what happened to the old burial plot noted by Sidney Perley and others.

In particular, the focus of Veteran's Day is related to military service and the sacrifices thereof. Originally, this day was a remembrance of World War I: Victory Gardens, Ground zero, Frank Balch, James Bryant Conant, and more.

Indirectly, we have mentioned other conflicts of a wider, than personal, nature. After all, the tragedies and turmoil of the western movement were huge individually and collectively. We who look back have no notion of the extent of this (say, pondering the English Wigwam of early New England). Too, conflict with the American Indian was almost constant.

Yet, there have been major conflicts that impacted the whole of the U.S. from before and after the frontier century. We are coming upon the 250th of the Revolution (see SAR/DAR). After that, there was the continuation in the events of the War of 1812.

These recurrences are generational in scope. We will spend more time looking at this. The fifth generation bore the brunt of the Revolution; the sixth endured the 1812 problems. In general, generations will be of interest an almost uncountable number of reasons. The existence of Mayflower data has brought to fore several types of analysis: About generations. 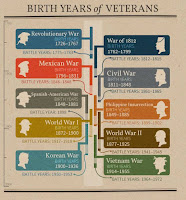 So, to the theme of the post, what is a veteran? We have the general definition related to being old or experienced. But, the norm now ties the word to a military usage, hence the Department of Veterans Affairs of the U.S. Rather than point to the [dot]gov site, we let Wikipedia show its stuff with respect to coverage of something.

Today, on Facebook (which seemed to come from the blog post that references Flickr which shrugs its shoulders (404) - we need a new focus - show provenance, give credit), I saw this chart which shows the conflicts which the U.S. has been involved with. Then, for each, it provides the expected birth year and a range. At the same time, the span of time for serving in the military during the time of each conflict is given.

The chart only goes to the Vietnam era. There, participants were born from 1914 to 1955. As we saw, there were some WWI, but mostly WWII and Korean veterans were serving in the military. The civilian population had a different mixture. Over a two-century span (remember, the Viet event is the context), the nine conflicts amount to over four conflicts per century which maps to conflict one per generation.

Let's see, has that carried on or accelerated?

We will continue to help document details from these past conflicts as we go forward with the several observances that are annual. At the same time, we have to bring in the world view, starting with our British cousins. Four hundred years ago, while our forefathers dabbled in a new environment and survived, that old world shook continually with conflicts, large and small. Some of that tension came over here over the long period.

11/12/2022 --  We will follow one veteran and his spouse as they venture west over the timeframe that included the Civil War and events before and after. That, too, brings in New Spain and New France.