At our portal (tgsoc.org), we have a scroll of text related to the themes of TGS, Inc. The original source for these items was The Gardner Annals with some coming from later issues of Gardner's Beacon. At some point, we'll identify the source for each item which is kept short. Of late, we have used another source: Chronicles of Old Salem. We wrote about this little gem (1948) this past summer. The book ought to be updated.

Entries from this book are marked with 'CoOS' with a year and sometimes a date. We picked out a few pertinent quotes a few months ago with the intent to revisit the book. Today, a few more quote were extracted, including this one (page  100):

Well, several things catch the eye with this. Technology, of course, in terms of X-Ray. Too, the national focus at the time which was WWI. There is also a reference in CoOS about Frank and Elizabeth Balch selling their house, in 1921, to The American Legion Post #23.


And, Balch? We know that daughter, Sarah, married Benjamin Balch who was son of John. Many Balchs are Thomas Gardner descendants, so, we'll look into this later.

Right now, who was Frank Balch? We have gathered a few items. The Balch Family Genealogy page on Facebook has Frank as living from 1880 to 1937. The Encyclopedia of SciFi notes that he wrote a novel that was inspired by Jules Verne: A Submarine Tour (1905).

CoOS notes that the decision by the Army and Navy was in 1917. We see that Frank patented a screen in 1922 which patent was granted in 1925 (US1532795A): Fluorescent screen and method of making same. We see references to his company which was out on the west coast, too, by 1921: The American Journal of Roentgenology. 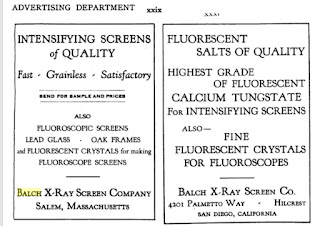 What do we know of his family? The McIntire Tour shows #329 Essex as having been owned by Frank Balch. There are lots of pictures of the house on the web. It's registered several way.

Note: There are two references to Frank inventing the x-ray in 1898 on the web. Both seem to originate from Salem. Ought to be corrected. Another had him owning the house in 1881. Of course, trying to note all of the misinformation on the www is futile. There ought to be some coherent view of this guy somewhere.

Also, there seems to be a dearth of information about Frank and Elizabeth, though. So, that'll be another day's work.