It would be nice if we could resurrect a 'google' map of Salem of old. Of course, that's sheer laziness.

What we can do is appreciate Sidney's work (walkabouts). Too, we can look for paintings that were of the period before the modern. When, I might add, progress caused lots of changes.

One that I am tracking down? The missing graves of Gardner's Hill. The search has involved Sidney's work: How close is close? II As well, there were several paintings of an area upstream that allow some notion of how things were, somewhat, at the time of the elders: Gardner's Bridge.

Of late, we have seen discussion about where the hangings were. Well, Ann's family had a house on Gallows Hill so they know the area. Myself, only 20th and 21st century experience, way after the fact. But, Sidney knew: Gallows and more.

The gist? Somewhere I read that Thomas Gardner liked the place where he was buried since he could sit there and see the water. Mind you, this area was between Gallows Hill and Harmony Grove Cemetery. We'll be mapping this out. I could not get some notion of the elevation. No doubt, there are records at the State level about the work involved with the road adjustment in the 1840s. Too, there was a lawsuit.

But, why pursue this 'dead' horse? Samuel Pickering Gardner who had left Salem for Boston visited the area in the 1830s and was upset by the situation: How close is close? And, it's a family matter as the seller of the property was of the Samuel (son of Thomas) line as is Dr. Frank, Ann, and others. In fact, Samuel owned this land after Thomas died. So, there are lots of reasons. However, a motivational event happened, today (below).

Okay, was reading Streets of Salem: A County in Crisis, 1692. Great post, per usual. On the page was a link to a post about the Salem Heritage Trail. And, that post contained an image of a painting from 1818 by Alvin Fisher. What? First, the image. 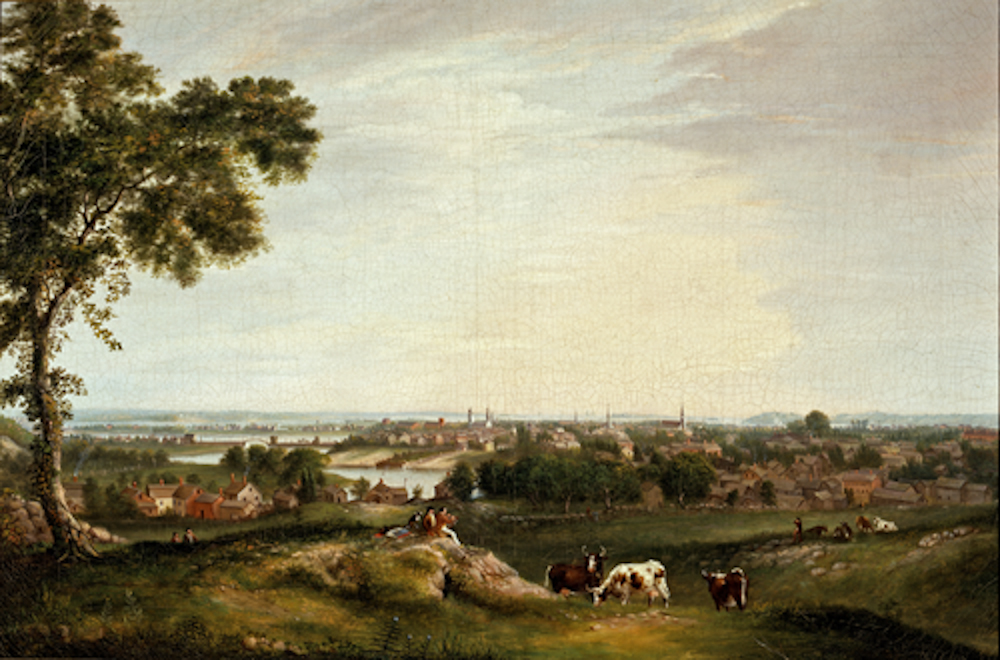 From Gallows hill, a view of Salem. Will have to map this out, but it does give some indication of elevation. Gardner's Hill would have been to the left following a 'U' (dimensions to be defined).

Landmarks? Anyone know of some analysis that has been done of this painting? Of course, we'll keep looking for other paintings of this type.

But, in terms of research, yes, there are more questions than answers. So, today there was a 'shot in the arm' type of thing. I feel that I have gotten a run around by those who ought to know, since I first started poking around this issue.

'Where is Thomas?' seems like a reasonable question. Notice that I first asked that question in October of 2010. Never heard an answer that stood up to query. It has taken a while for me to piece things together. And, Sidney was very instructive once I got to know his work.

BTW, Harmony Grove? Yes, I have been there. Dr. Frank's grandmother is buried there.

Aside, Dr. Frank remains are in Greenlawn Cemetery, Salem, MA. 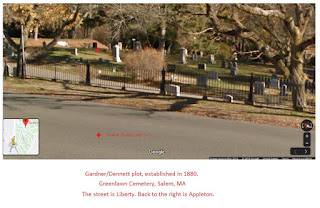 This might be a good place for the good Gardners (and their friends) who are descendants of Thomas to think about having some little memorial to Thomas and Margaret. We can measure how far this is from where Thomas' grave was in the Gardner Burial Plot.

Note: Went looking for maps of Salem. Of course, Sidney's came up. Plus, I found a site that had collected many views: The Mystery of Gallows Hill (references this work - Gallows Hill: Where Were the Witches hung?). The pages have the photo of Sidney at the Crevice and more. Also, in the painting, one can see North River (below) and Ledge Hill (to the left) which is south(east) of where Harmony Grove Cemetery is now. ... All we have to do is figure the dimensions from this in order to place Garner's Hill appropriately.

Reminder: The Trask view. One of their plots is still on Boston Street. It was near the Gardner Burial Plot. Too, History of Mass blog.

11/10/2019 -- Changed Dr. Frank's record to read Greenlawn Cemetery rather than Harmony Grove Cemetery. His remains are in the Gardner/Dennett plot established in 1880.