Measures of the metrical

The modern world runs on numbers. Madly. This is abated by computing which is numbers to its core. Well, not. Anyone poking into the depth knows that we get to hardware, eventually. And, that involves a lot of stuff. In fact, it's so complicated now that we cannot put our fingers on, get our heads wrapped around, attempt to tame, ... a whole bunch of stuff.

So, we have the need for truth engineering. And, to me, TGS, Inc.'s work will involve that. But, let's not get ahead of ourselves. After all, how might deep issues related to filling in family records and such? Ah, heard of 'deep learning' which has been on the news for a little bit now?

We've not shirked dealing with numbers. This little bit is an example. See Review and news from about this time last year. That post points back to 2015 post. There are others of the same ilk that we'll pull together. Every year, we have done a Summary.

I was just looking at some "who is largest?" work that goes on all day. Ever pick up some of these metrics and look at them? First of all, about all combinations are presents, with purty graphics. I'll not step further down that road, right now. But, one has to wonder how the data is attained. Of course, we know. It's our stuff that is freely available due to early discussions. And, that, folks, leads to open issues, still unresolved. So, this post is apropos.

Anyway, here's a little graphic relating to number of posts per month by year with the first nine months of 2019 included. 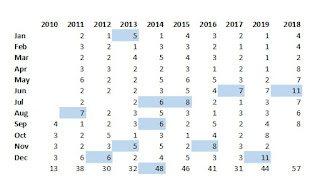 This year, I decided to do more posts, even though this is run by Google's method. We are working on other approaches, such as this little technical thing on our own server. But, again, that's ongoing. Also, it's more than technical as we discuss motivation.

So, June of this year had the greatest number of posts since the beginning. What was that? Well, There were several themes going on: the missing grave of Thomas, graves of veterans (of several wars) without any information about the person, and more. On the first, we found several paintings of the area of Gardner bridge. More stuff to do there. For one grave, we searched out the person's lineage plus filled in the family information. With that, we got findagrave updated. Also, we got ourselves involved in looking at two Thomas Gardners in the 1623/24 timeframe. Father and son? Lots to consider.

We finally looked at Chronicles of Old Salem and found it quite interesting to our newbie selves. In fact, from that, items have been added to the timeline text at the portal to truth. We have slowly been working on renovations. I have posted some information on GitHub (and will be adding more). Be aware, that we're considering important issues in a manner that does not assume much. As in, yeap, I  mainly work via a laptop. I'll get a smart phone when we get to where we're supporting TGS, Inc. via some of the 'problematic' social media. Oh yes, don't believe me when I say that we've created a mess, in general? Who else but old Thomas Gardner to use as a moral example?

Oh yes, Sidney. He wrote his thoughts on his decade plus efforts in Salem where he found little assistance. Dr. Frank helped. Too, Dr. Frank's sister, Lucie, published a continuation of Sidney's work in The Massachusetts Magazine. Sidney quit his Essex Antiquarian work and went and wrote the History of Salem. His work is the main source for information about the witch mania the yearly celebration of that is coming up.

Oh yes, my posts are longer than one normally finds. Example: The Gardiner that was. My research has found some conflicting stories. How to untangle this knot? It'll happen; we're just collecting data, at this point. Also, I go back and edit posts to add more information (or to make modifications). As well, I add in comments (timestamped). Take Dr. Frank's post. It started in February of 2011. There is also a category of Dr. Frank that pulls related posts together into one view. He was a busy guy and did a whole lot of work. Lots more stuff to discuss. Right now, I am looking at the family history of his two wives.

There are a slew of posts that point to specific articles in The Massachusetts Magazine. We really need an index. This was tried for a couple of Volumes by Dr. Frank. But, that's a lot of work. Examples: NEHGR 2016, NEHGR 2017. That took a bit of work.

As far as that goes, we need an index for Gardner's Beacon.