TL;DR -- In the territory of the U.S., whether the colonial times or after, people have trekked along trails leaving tracks. Technology brought us several ways to make tracks more permanent, namely the railroad and the road are examples. The rails? In the1880s (later part), there was rail from coast to coast (let's say, one thread of such though there was already a network of such) that supported passable traffic, to a degree. Mountains and rivers continued to be an inhibitor of traffic. Accomplishments related to these facilities took lots of blood, sweat and tears. And, remembrance of that is important; first, though, we need acknowledgement of the deeds. That suggests knowing details beyond mere generalization.

We just had a post (Trails and tracks) on the trail of notoriety that crossed the middle U.S. and ended up at a terminus of another trail that came out of Mexico (New Spain) and was much longer. The New Spain route was part of the Camino Real system. We will look further at that topic.

With respect to other types of tracks, the railroad (see Recap, again) comes to mind as it spread over the landscape. We have a graphic which show the growth by marking the post offices as they moved with the rails. See Pace of change. These two, the railroad and the post office, are types of technology that were (are and will be) of importance. 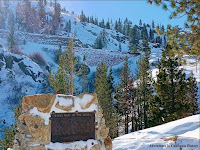 Today, Woodbury Historical Tours shared a link to a monument on Donner Summit  The site is dedicated to the Chinese workers who came over to help build the railroad and were the largest group of laborers. Near the monument is the "China Wall" which is a retaining wall built by hand. There were two walls. Additionally, tunnels were dug out by hand.

Of course the Pass was infamous earlier in the century. However, it still is fierce in the winter and creates havoc for traffic of all sorts. An interstate through that area experiences frequent closings. By April, snow banks are piled high on the side of the road. 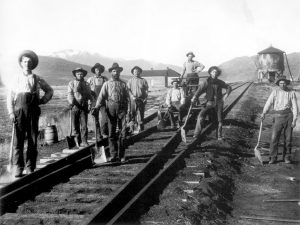 As mentioned, the Chinese workers were by far the largest group. Comparatively, several other groups stand out, such as the Irish. There is a monument to this group in the next state: Irish Railroad Workers.

We might take a relook at the industry since John is from a railroad family. There are plenty of other jobs related to this accomplishment which is usually associated with names like Stanford in the West and Cornelius Vanderbilt in the East, of the U.S.

We might use the Katy Railroad as an example as it has already come up in reference to the long reach of New England. Too, population centers shifted as the railroad made decisions about routes. Today, one finds long paths in many places where rails were lifted so that walkers and bikers can traverse the resulting trail. U.S. and railroads go way back.

Earlier, we had a post about the Woodbury Historical Tours as we ran into their posts while browsing different subject. That was a nice thing to find. On the other hand, Woodbury was a Cape Ann family. We have not explored that aspect as of yet.  See Tours, of the real. One motivation for that post was something they wrote mentioning the Bents who we looked at earlier. And, their approach appealed for several reasons. A main one? In this day and age, we need to 'ground' lots of information and rhetoric by specific effort due to the influence that technology can have on our grasp of what is.

That's another discussion best left for another day.