Tours, of the real

TL;DR -- We are of the west and have been, for the most part. Though, the long arm of New England is always there. A couple of years ago, we looked inward after considering all of the naval modes that came about in the 400 years of interest. Or, if we were doing land studies, the wilderness was only a few hundred miles away. Lewis & Clark, thanks to Jefferson, opened a huge vista. There had always been those who traipsed the regions, early on with the Native Americans. Then, we had this rolling wave, technologically abetted, that ran over the landscape, carving it into pieces. Or trying to. Our upcoming anniversaries will allow us to relook (again) and to, perhaps, make ourselves and things better.

This year, we ran across a photo of a cemetery. Looked to be New England. Or, any of the northern wooded  areas that abound. It turned out to be in the area of The Catholic Osage Mission which was established in 1830s to serve Native Americans who had been forced out west by President Jackson. This was the early group. Our post looked at the Mission and those involved. Of note was that this was on the KS side of the area, not the MO side (referring to a conflict that ensued three decades later). 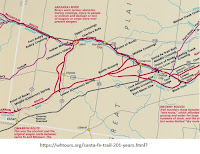 Today, their FB page pointed to a site (Woodbury Historical Tours - link only, no endorsement) which had an image that showed part of the Santa Fe Trail. On visiting the site, we saw an image which shows details of a very interesting trek that is planned for next month. The trek (technically assisted) goes from Kansas City, MO to Sante Fe, NM. In the image, one sees two major rivers. One is the Arkansas; the other is the Cimarron. We spent some time the past couple of years, looking at rivers as a boon and a bane.

It is great to see this type of offering which we hope will become more prevalent in the future. The U.S. start is coming up (250th). The Frontier Century started a couple hundred years ago. Before then, we had the fur trade drawing people out west. One example is William S. Bent (Trapper, trader, rancher). Pertinent to this graphic (map) is Jedediah Strong Smith who met his demise somewhere in the area depicted by the lower part.

JSS has a modern following that was organized in the Berkeley, CA area. David Woodbury (Historians discuss the Civil War) lives and works in the Stanford area. He is not leading this tour but has been active in publishing which caught our interest with respect to different attempts over the years. Say, TMM (Dr. Frank) which published some of the western visitors, like Col. T.W. Higginson or Judge F.M. Thompson. Or, even someone of the Sanborn family.

One of our regular modes is to find New England connections in general followed by determining if there are further links to the specifics of Massachusetts, Essex County or Cape Ann. Woodbury was one of the initial investors and "comoverers" (quoting H.H. Crapo). Of course, a Woodbury is in Ann's lineage through Benjamin Brown Gardner, spouse of Lucy Foster Wilson Gardner which is part of the additional interest. Families moved far and wide over the years.

Aside: We have done extensive research in the large middle of the country and have barely touched the whole of it. At the same time, given Essex County's shoreline, we have lots and lots of work to do with regard to the navalphiles. Then, there are the other cultures who were here, the various News (Spain, France, Sweden, and others). We like the middle given our landlubber modes.

There were many trails. Later, before the railroads came in, we had attempts at systems for moving people and goods by coach. One of these was the Butterfield effort which leveraged off some work done by an Ipswicher of the Giddings family. But, we are getting ahead of ourselves. As we really need to fill in lots of holes with regard to those early families that came after Lewis & Clark left and around the time that Boone came in.

Back to David Woodbury, he wrote a diary starting with the March 2020 inception of the lockdown. Some of his comments are funny, such as the references to the totally unrealistic views of some Zuckerberg - types (did I get that right?). And, these ones (immature lot) gave us the stupid web out of silly valley. For a while, Woodbury worked with Savas Beatie who seems to be out of Iowa. We ran into that state when researching what happened to the North American Review.

We are regrouping and, so, expect more of these recaps that are motivated by what others are doing to help get the message out about American, its past and why it induces a dream state so readily.