TL;DR -- Cape Ann was a major start, after the dallying at Plymouth. Rev. Higginson had some 300 or so souls follow him to Salem. By then, the early party had moved from Cape Ann where Thomas Gardner was a lead in a crew who were to ship food back. Higginson was a preacher and wasted no time in getting started on that. His family? Interchanges twixt them and other families from Cape Ann and later. We start to look at this as an example of significance.

As the 400ths look back at the Cape Ann event, we see it as an opportunity to identify, organize, and perform research projects on a regular basis. The past twelve years with this blog and with Gardner's Beacon was an effort at establishing a proper basis which will allow us to work and write. One of the tasks will be to look at families in a manner to allow a more coherent view going forward than has been given us to date. Partly, we are saying that this time around, we have the gift of the net (good and bad) to work with. This post is about one such family.

Rev. Francis Higginson came over after Endicott and before Winthrop's fleet arrived bringing settlers on several ships. He was the one who wrote "we found a faire house newly built for the Governor" which we call the Great House that was constructed on Cape Ann and which was then moved from to Salem. See his book: New Englands Plantation; Or, A Short and True Description of the Commodities and Discommodities of that Country.

For further information on the Rev., we can refer to research by his later descendant, Col. T.W. Higginson, who wrote of the Higginson family. We take a further look at Col.  T.W., below. Let's start a look at the family by considering the times and some of the ties with the Gardner family of Salem. In the Wikipedia post, Col. T.W. is quoted:

They would have to build their lodgings for the coming winter from scratch. These were some of the first settlers of the Massachusetts Bay Colony, the main body who would start coming in 1630 on the Winthrop Fleet. The Higginson Fleet set sail on the 1 May 1629, arriving in Salem harbor on the 24 June 1629, and was greeted by a small group of settlers, led by John Endecott.

The bold/italics emphasis is ours. We had a post on the "First year" where we showed a photo of an English wigwam as envisioned by Dow, the Salem expert, during the 300th celebrations a 100 years ago. This type of housing went on for a while until there was an effort to coerce families into building regular housing. That was a distraction from the regular duties related to farming, fishing, et al.

One of the great-grandsons of Rev. Francis, John Higginson (WikiTree and #10 in book), married a descendant of Thomas Gardner. She was Hannah Gardner (WikiTree) who was a granddaughter of Thomas' son, George. They are ancestors of many Higginsons. However, Col. T.W., while a descenant of John, is not a descendant of Hannah who died. John's second wife was the ancestor.

Hannah's gravestone was recently cleaned using a new method. She was buried in Burying Point Cemetery (FindAGrave #8141517). There are 32 Higginson and Gardner graves in that cemetery including that of her husband, John, and his ancestor, Rev. Francis. 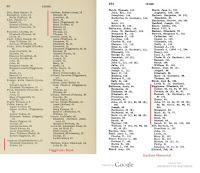 The graphic shows "Gardner" in his book and "Higginson" in Dr. Frank's book. There are many more overlaps than shown with these looks at the index of their books. Modern techniques will allow us to look at this.
We got our attention drawn to Col. T.W. in that he came out to KS during the pre-Civil-War era to support the Free-State movement. He gave support to John Brown by being a member of the Secret Six (Wikipedia - our post) along with Sanborn and others. He supported the Old Planters Society from its beginning with Frank A. Gardner, MD.

The Higginson family was of the Old Planters of Massachusetts and has ties to many other families, including Gardner. Later in this post, we look at Harvard connections.

Col. T.W. gathered data and wrote of the family's genealogy in the same time period that we saw lots of family histories being written, as these were motivated by the 300th anniversary.

With respect to the culture of Massachusetts, in general, we will be doing research in that area, such as we have with our look at the History of Harvard. Our first focus is on the Heads of Harvard. We started this work after reading about James Bryant Conant.

Col. T.W. was a graduate of Harvard, as was Dr. Frank. On the post about Col. T.W. that we did here, we included three pages of images from his book which show reference to Harvard University (or College). The two were John Thornton Kirkland and Abbot Lawrence Lowell.

The Higginsons are still around as are the Gardners and others. This post is a beginning and looked at some aspects of their history over the 400 years. Lots more is there to look at.
Example: Used Swift, Worth, Higginson and Gardner with respect to blended families. We had several cases where a Gardner mother was one of a series of spouses leaving us step-relationship to figure out.