We will have more about the guy as we go along. For Gardners and friends? We need to remember, Rev. Hubbard was the first to write about Thomas and John (Tylly) and, thusly, deserves eternal honors.

I am putting this post here in that some controversy has raged about the start of New Hampshire (but, some of the posts will be at the technical site and at the Truth Engineering site). As in, what year ought to be placed for the first effort at a settlement (or attempt, thereof)?

The two images are from distinct viewpoints: a modern publication and Hubbard's work (pg 214).

Why is Hubbard second? Well, we are going backward in time. The first publication quotes another work from the 1900s (Noyes, Libby, Davis) which we will get to. NLD takes Hubbard's book (and viewpoint) to task. Too, NLD may mention other work. We will get to that.

This post is just a starter bit; as we collect information, it'll be posted. We intend to be thorough.

05/02/2015 -- So, one controversy (of several): 1623 or 1628. (See Heather Wilkinson Rojo's post)... Mind you, Hubbard was using material available at the time and talking to people of that era. Here is one example. Of course, we see new material coming up via the internet all the time. What did NLD have in their day (well, access to the original documents)? We will see.

05/03/2015 -- Some edit (late night post) on the morning after. It is not all about Rev. Hubbard. Rather, we want to see the total picture; commercialization schemes seem to be making the internet more fragmented than it need be (but, then, that is another topic that is being discussed, sometimes heatedly, in this day and age). ... One would think that New Hampshire would weigh in on this piece of its history.

05/04/2015 -- A collection of sites about the subject follows. The controversy seems to revolve around the Hiltons. Plenty of sites claim 1623 (Thompson's effort to settle, for one).

The Great Migration publication (RCA) has David Thomson arriving in 1623. The official NH page has that year, too. Thomson was there even if the Hiltons may not have been. 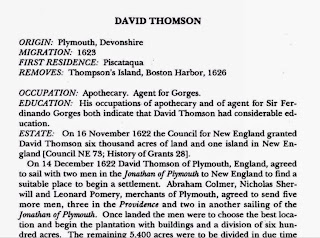 Who was first? Portsmouth or Dover or who? Note, please, that this report says that some controversy about Hilton Head came from Hubbard, published in 1680. Sorry, folks, the poor guy's manuscript was carried/thrown about for 100 years or so (almost lost) before it was finally printed in 1815 and published with annotations in the mid-1800s.

... So, some see Rev. Hubbard as the Rodney Dangerfield of historians. ...