The order of the names is intentional which we'll get into, eventually. Right now, let's look at a matter that deals with technology. We have touched a little on DNA studies and will have more. Again, it'll be from looking at the underlying frameworks. There are all sorts of genealogy examples related to computing. WikiTree is an example and used here.

The other day, I saw a question on Quora about Edward III. It was from someone who has a large English heritage. It asked: what was the chance of being related to Ed III? Well, I have thought that we need to get people to think of 'related to' and 'descended from' in the various contexts being brought up by technology. The 'related to' is even thought of technically with respect to Kevin Bacon. 'descended from' is biological, however that is becoming more of a mess. With what ramifications is unknown now. Be aware, though.

There are other 'related to' types. One might be in-laws in a huge family (it takes a village sense). Mentioning Kevin showed another.  But, there are many more. Say, the 'step' relationship is commonly found. But, there are so many others which can be itemized, at some point. Right now, we will start by following one line using Dr. Frank that goes through his paternal grandfather.

As well as discussing biological versus not, I thought that I would see how WikiTree's little model worked. There are other sites that offer kin analysis (FamousKin is one), but I wanted to use one that was trustworthy (my judgment after use) to some extent. With the usual caveat, the below analysis will be looked at further. 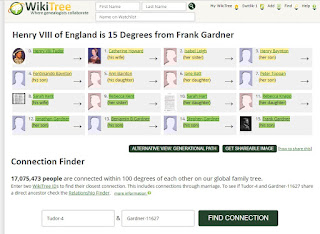 This shows that Dr. Frank has a series of links that go back to Henry VIII on WikiTree.  The close relationship is with one of HVIII's wives. However, within this graph are several others. My article is going to step through all of these. We can do this time and again.

Actually, this work is the fleshing of history that we really need to do to get a better understanding. The abstract'd view of History leaves much to be desired. Ever wonder about the appeal of the work of McCullough?

So, in this case, we will start with looking at Thomas Cranmer whose brother, Edmund, is an ancestor.

After looking at that one line, we can look for other examples, both from the trees of the other seven grandfathers and the grandmothers tree. So far, we have relationships via Catherine Howard, Mary Tudor, Jane Seymour, and Catherine Parr. I will be looking for some others via later generations. 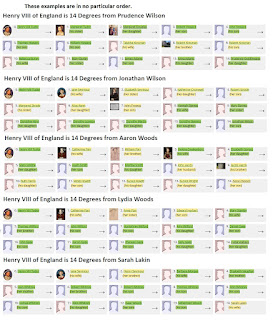 07/22/2019 -- We continue the theme by looking at connections on this side of the pond, motivated by reading about Julia (Ward) Howe (see connections of ALGS and JWH).