TL;DR -- We saw mention of the song in an article and went to look as the names were familiar. How did the person relate? Our focus is onioned with Cape Ann at the core and the U. S. further out with the world as the final layer. 400 years covers a lot of territory (space and time). Since we were looking at WikiTree, we tried some of their analysis-and-graph techniques.
---
This post continues the theme of preparations for the next issue of The Gardner Annals (Vol. V, No. 1). Last post, we were looking at Dr. Frank and Henry VIII in terms of connections along the line of the Kevin Bacon deal (ALGS is about 3 degrees from Kevin). Those types of connections are open as they include common types of relationships.

We're looking at relationships in terms of nature and nurture. In the former, there would be some DNA linkage such as being descendant from or having a common ancestor. Then, we have the slew of cultural relations. In the above, we saw that Dr. Frank links with Henry VIII through his sister and three of his wives. The graph is on WikiTree and was easily attainable since they compute these for featured Profiles with Henry VIII being the current focus. To isolate some of the other connections, we went and used Dr. Frank's great-grandparents.

This analysis is supposed to work with any two Profiles, however several failed since they had a restriction on 10 links (takes lot of computer time and memory). Today, we were reading an old review in the WSJ about 'Songs of America.' One in particular is the Battle Hymn of the Republic, with lyrics by Julia (Ward) Howe (Wikipedia, her genealogy). Julia's husband (Samuel Gridley Howe) was one of the secret supporters (they went underground as the Feds came north, following rumors) of John Brown (she used the tune of John Brown's body), as was Col. Thomas W. Higginson about whom we wrote three years ago. The Colonel worked with Dr. Frank and his sister on The Massachusetts Magazine. So, there is a relationship right there.
---
Aside: Both Julia and her husband are cousins. The below looks at her husband, with the intent to match up a family somewhere in the past. But, the focus was technical, not genealogical. As with any work, we can note that WikiTree researchers can do things right. The Magna Carta project is an example where they are proving one thread (path) from a gateway focus back to a Surety or other person there. So, trust but verify? We have not done the second part yet. Actually, we can point out some missteps that occurred in the analysis that we overcame manually.

Given that we wanted to test WikiTree, we used another Profile (that of ALGS' 1st-great). An earlier model had showed her connected to Henry VIII through his sister. That particular link came in via the Howe family. So, we tried to show the relationship twixt the grandmother of ALGS and the husband of Julia. It went through 66K profiles to form this graph.

#7 is Rev. John Wise (Thomas Gardner of Roxbury), the inspiration for the Declaration of Independence according to Calvin Coolidge. Here is another view. 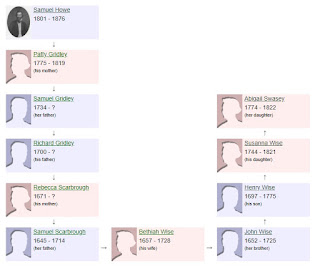 This is interesting as just two generations removed from Abigail is the Howe connection (see below). This type of analysis is not as easy as it looks. Many times, as in the case of Henry VIII, many links are computed and stored. The query is merely looking for a match within a few generations. WikiTree has been doing this analysis for awhile. It'll be worth while to see how many of those have been stored so that we can retrieve the information.

As well, this is a connection search which has fewer constraints than would the relationship one have. Now, to do a manual search, we can get both profiles (Samuel Howe and Abigail Swazey) and do an ancestor graph. Then, we can match up nodes that will show the common ancestor.

So, starting with these two, we go back four generations. 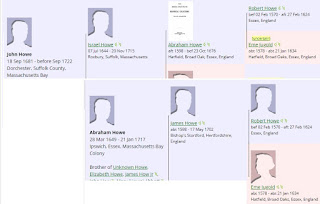 Samuel's and Julia's time was the U.S. Civil War. Abigail was the War of 1812 while her father was the Revolutionary War and the French-Indian War.

BTW, the great-uncle of Abigail's husband, and his wife, were the couple who were featured in McCullough's look at the Revolutionary War. McCullough used the The Letters of Joseph Hodgkins and Sarah Perkins – Historic Ipswich to build a story.
Aside: technology of the compute ilk will be a thorn in our sides forever. Something like the genie being let out of the bottle. So? What to do? Learn to be wise and not be led by the wizards and others who would wish such roles for themselves.
---

One motivation for this [type of] analysis will be to write stories related to the extended family of Thomas and Margaret (Fryer) Gardner.
Aside: D.A.R. has been working for 100 years to have their database allow matchings to ease the work of applying. Great effort. S.A.R. is now following along. Good decision, fellas. Oh, databases were not there 100 years ago? Tsk. Ever heard of content versus configuration? We'll touch on that more.