TL;DR -- The year of 1636 followed Winthrop's arrival closely. There are many factors to consider with respect to those times and their interests to the problems of today. We have another go-around coming up with a new twist, technology. Going forward, new ways to know will be emerging; yet, reflection on history will be a continuing theme. We will continue to look backward and forward.

Our Heads of Harvard (Wikipedia) work is progressing. It was only recently that we thought to bring in Nathaniel Eaton (Wikipedia, WikiTree). We now know sufficiently enough to discuss him and his times. Of late, Nathaniel came to fore while we looked to add Edward Holyoke to our list.

We learned early in our work that Nathaniel Eaton (Benjamin Brown Gardner) needed to be on the ancestor list having been ignored for several generations. Once we made this find, we started to consider why he had been cancelled (using the modern  concept). We looked at his academic record, for instance (The Hebraist). We read lots of stories, some of which were fairly new rehashes of questionable value. But, at the time, we were in a position of trying to fill in gaps.
Then, we realized that others had been looking at the guy, too. In fact, they referenced our digging into the details concerning the son left behind and his progeny. That citation was in The American Genealogist. This article and the referenced article are now in the database of the NEHGS with appropriate bit of index information to support future research. The below image shows the first page of the TAG article plus the page that references the article that Thomas Gardner Research, Inc. published in The Essex Genealogist. 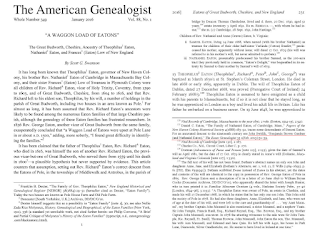 There has been more research done since then which we will get back to. But, all along, our thought was about the veracity of statements, especially from the youngsters. Some have studied the relationships twixt the institution and the students along Harvard's history. We will look at that, as well. Let's leave this, for now, with a quote from the prior post dealing with Holyoke.

Edward was also associated with changing the "intellectual climate" through several means such as having a focus on merit rather than pedigree, stressing scholarship, and removing flogging (which was a very much unanticipated theme). With regard to the last, Eaton ran into issues due to being abusive. In her article titled "The Dilemma of Corporal Punishment at Harvard College" that appeared in the History of Education Quarterly ( 1974, Cambridge University), K. C. Moore looks at the issue which is easy to "pass over" for several reasons. With respect to the Eaton incident, one might make comparison with other situations such as the U.S. Navy (and other organizations of the like). We have an eye witness account by Richard Henry Dana (Two Years Before the Mast), who had been at Harvard, of a flogging at sea almost two hundred years later.

On another note, this series of posts has been quite instructive for several reasons. It's 400-year coverage of the U.S. allows us to relook at themes that are broad and deep. For instance, New England turned out to have a very long reach both across the interior of the country as it was developed and around the world. As the 250th looms, this viewpoint will be significant. Too, though, we are at the threshold of the remembrance of things related to the Cape Ann's venture. Hence, we can say that we are looking forward to the next few years (decades).
When we started our research in 2010, things were hugely different from what we see now. From time to time, we see older sites still extant. Hopefully, some of those may persist. Otherwise, we can hope to learn from "wayback" approaches.
Remarks: Modified: 07/23/2022
07/22/2022 --
Posted by AJSwtlk at 8:31 AM