TL;DR -- We continue our look at U.S. history by way of the Heads of Harvard with a look at the first  female Head. Drew Gilpin Faust was from Virginia and a Historian of the Civil War.

Our look at the Heads of Harvard (Wikipedia) has been quite useful with only a cursory look. We will be taking this theme as a regular meme while we continue the review of the U.S. through time. Initially, the interests were several, but we have started with this look:
We are about 1/2 way through these folks. After completing the list, we will tie U.S. generations back to these Heads in terms of general happenings as well as specific family involvements through the 400 years. 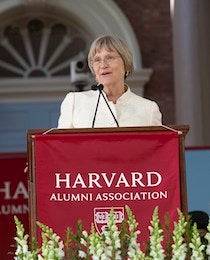 The first female president (and #28) was Drew Gilpin Faust (Wikipedia, WikiTree - her father, McGhee Tyson Gilpin). She was a graduate of Bryn Mawr and the first since 1672 to hold the position while not being a graduate of Harvard. She was in the office from 2007 to 2018 (News, President Faust), brought back the ROTC, and installed the first Muslim chaplain.

Her biography at Harvard is the index (get direct link) of the archive.org collection. She was a Historian of the Civil War and from Virginia, a southern state. As well as looking at her accomplishments, we will look at the family history for connections to New England, north.

1. We mentioned Drew in our post on Emmy Noether who ought to be better known and in the one on Women's History Month, 2022. Derek Bok was interim in the role prior to her time.

03/13/2022 -- This was the first post of the Women's History Month theme. There is an in-law tie and several cultural ones. One pedigree line for Faust goes back to the Downing family which was connected to son Joseph. Culturally, both graduates and professors of Bryn Mawr have associations to look at further.
Posted by AJSwtlk at 8:39 AM