The recent American Ancestors magazine from the NEHGS looks at their history given that this year is the 175th anniversary. We learned several things from this overview which will lead to a little more attention to be paid to the group, their history, and work. For one, the tan books which are the vital records of Massachusetts towns were a NEHGS project. Early on, we saw that those books were available via the NEHGS membership. These was a very important endeavor. There was a latter on-line effort that we used a lot (Early Vital Records of Massachusetts). The NEHGS did the Great Migration series. There are other great things done in 175 years.

We only have 10 years and do acknowledge that the research membership has been quite helpful in terms of having access to records plus hearing from researchers. Too, their staff help with the WikiTree project concerned with documenting early immigrants.

Also, they have several databases, one of which contains images of the applications presented by members. We had not paid attention but went to look. How many included Thomas Gardner in their application as an ancestor? A quick search brought up over 300 mentions. On taking a closer look, some popped up as being of Thomas and Margaret. We can look at what membership entailed and the qualifications. The first member was President John Quincy Adams. Several other Presidents applied.

Here are a few folks with Thomas Gardner in the past. This is just a random pick. We will find out more about the members as their auto-bios are included. The early ones are hand-written.

As we were sampling, we saw Dr. Frank's name mentioned. He became a member in 1898. 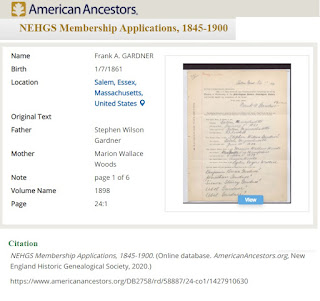 Pending is getting the rest of the descendants pulled out of Wikipedia to a post here on this blog.
Remarks: Modified: 11/10/2020
09/20/2020 -- Something to research. If one looks at Dr. Frank's record, it says 'dropped' in 1930. Let's see, that was about 12 years post his TMM. Too, another record that I saw said 'resigned' (these notes are marked in red). Dr. Frank did good work. So, did he raise some hackles at the NEHGS? Why the drop? You know, we wondered why Anderson, et al, did not use him in the Great Migration work. Books (and their work) from lots of other families were used. Back to the TMM. It did look like some competitor to whatever the NEHGS was doing. BTW, is genealogist even a valid occupation? Or, an example of ways to tramp on people's dreams with lead feet? Partly serious. Search on this blog for Bayes.
Posted by AJSwtlk at 10:57 AM