TL;DR -- Working to document Chloe. We have all of the stuff necessary. We're telling the tale.

Moral: GSMD, and its ways, are unAmerican, essentially. While we work this analysis, we will be updating the WikiTree Profiles of Chloe (Porter) Jackson and her daughter, Myra Hester (Jackson) Gill. We have all of the sources that are necessary; it may take a while to get this filled in.

People joke of the 'wall' they found. It's been our experience that most of these examples are from a side branch which represents a collateral family. Or, it might be so far back as to be mostly nuisance, like preventing one to join some mutual-admiration society. The ones that we say need better handling are those of the main line. The fact of an extant person (this case, Chloe (Porter) Jackson) suggests some type of lineage is there from which the person got their mojo.

Recap: Chloe's great-grandfather (Noah Porter) is in the Alden Silver Book. Her sister has descendants in the MF society. One of her Porter uncle's has descendants in the MF society. The details being expanded upon here were covered in a similar analysis that was published in The Gardner Annals (Vol III, No 1, Winter 2016) titled "Flyover country".

This images points to some of the documents that will be covered in the next paragraph. Are we dealing with a mere transformation of style? Not really, as we will show little snips from the documents, themselves. Some groups like a story with snippets related with some text. The Mayflower person's response? I know how to read these documents. Okay? What was the hangup (is my response)? 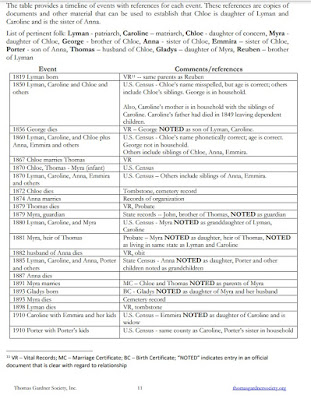 These bullets will be filled in during this exercise

Goal: Turn "this will be fun" into "that was fun".

Remarks: Modified: 11/10/2020
10/02/2020 -- Starting with the documentation and interpretation. Cursory view. Will change with details being covered.
11/06/2020 -- Last month was fairly busy, but we're back on this. Will be pulling an image of the sources together as we go along. BTW, to look ahead, see Chloe's daughter, Myra Hester Jackson who married Arthur Gill.
Posted by AJSwtlk at 11:30 AM