TL;DR -- Maine, scene of some early activity and part of Massachusetts for a long while, will be on our radar, for the most part.

One of the first groups that we ran into, after NSDAR, was OFFME (Order of the First Families of Maine) which had been founded in 2003. Perusing their Eligibility page was another learning experience. Early on, all of our work was focused on Essex County, MA and then extended out to other areas of Massachusetts and then New Hampshire. So, Maine was new territory. But, data seemed sparse, at least, that which was digitized at the time.

The most recently seen issue of the American Ancestors Magazine has a section on the 200th (1820 - 2020) of Maine. One article listed resources for learning about the area and its people. We started with the Old Kittery (Stackpole) book which represented a lot of research. It turns out, as most know, that this work was an example of efforts by researchers that happened throughout the whole area starting after the inception of the NEHGS. 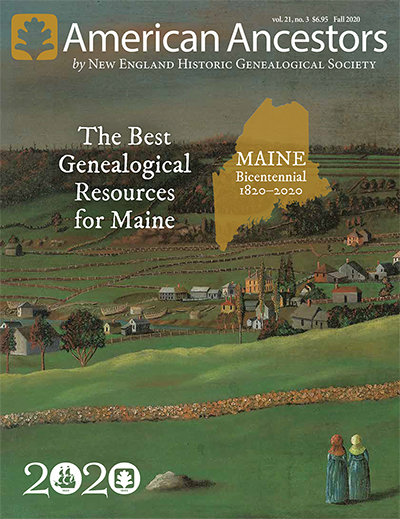 In fact, Dr. Frank started his work (1907 release) on Thomas Gardner back in the latter part of the 1800s.
We have had several posts related to Maine and have open research going on with respect to the area.
We will be looking at the State further as we continue our research. We commend the NEHGS on having the two-hundred year focus.