TL;DR -- Run into C.A. Flagg while researching a Patriot who served in Maine.

We were researching in the context of DAR and SAR and stumbled upon a nice surprise. Fortunately, the focus was Massachusetts and its derivative, Maine. Though, we have researched other states and will (ought to) do more of this. But, Lexington and Concord is taken as the origin of the turmoil that went on for several years. It may be that we do not appreciate that effort. Lots of history is told top down, by the victors. There is some bottom-up work, such as McCullough's look using Col. Hodgkins and his letters to his wife. The connection there is that he is the brother of one of Ann's GGPs. Sometimes, we have diaries. One diary connected to Gardners that we have mentioned is that of Nathaniel Knapp. But, this was from the prior conflict, the French-Indian affair, where the King trained the colonial leaders to rebel and to do it successfully.

With technology, we can do a better job of telling the tales, many of which have relevance today. And, lots of resources are on line with which to do this work. Let's look at some. 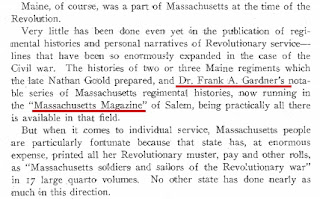 We will take a specific look at CA Flagg this year, especially his contributions to The Massachusetts Magazine where he had a regular column dealing with Massachusetts pioneers to Michigan. CA died in 1920. One wonders if that was due to some lingering impact of the Spanish Flu. He would have been 50 years old.

The next post on this subject will look at a couple of examples of Revolutionary War service as detailed in the SSP of MA and SSP of ME. We'll use a time frame that maps to service events over several years, using some actual records. After MA and ME, we'll drop south and look at a couple of states there. This is, somewhat, carrying on for Dr. Frank.