This post is a reminder of 29 December 1674 which is the day that Thomas Gardner died in Salem, MA. He led the team in 1623/24 that landed at Gloucester (Cape Ann) for the purpose of establishing farming and fishing that would return goods back to England. A few years later, the effort moved to the region that became Salem, MA. Later, still, John Endicott came with his new emphasis. Not long after that, John Winthrop arrived with the inception of the Great Migration.

Thomas Gardner's origins have not been adequately identified sufficiently for confirmation, however there are several ongoing research efforts (see WikiTree). Thomas married Margaret Friar. Margaret was as unknown as was Thomas until recently. Her family seems to have been identified in Sherborn, Dorset, England.

Thomas and Margaret had nine child, eight of whom have descendants. There is an active research project to identify their offspring: Descendants of Thomas (chain of posts starting with the eldest son).

When Thomas died, he was buried on Gardner Hill. But, that location was landscaped away during road work in the early 1800s. One of his descendants sold the land which was in the possession of son, Samuel. Another descendant visited the area in 1830s and reported on the consequences at the time of his visit of graves lost with stones moved or destroyed. We researched this topic for a few years: Our summary of the situation is in this post (Gardner's Beacon, Vol. IX, No. 1).

We are the Thomas Gardner Society (see About Us). Our 'portal to truth' is a vehicle to provide information, interact with our supporters, and demonstrate a simplified web presence. 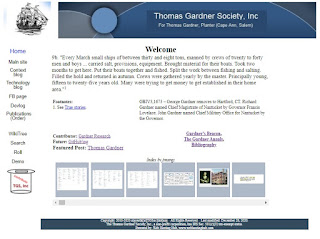